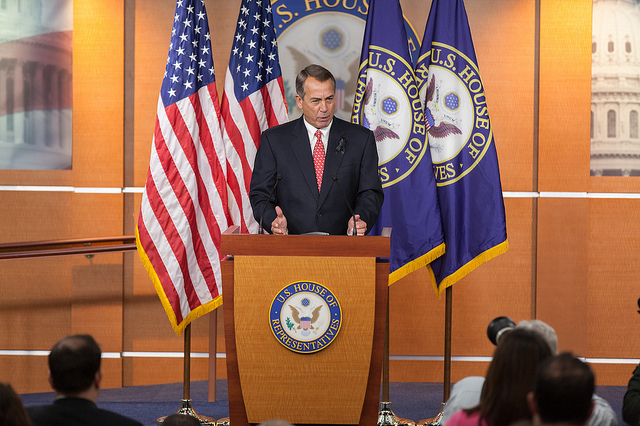 John Boehner is no fiscal hawk, despite what he would have you believe.

It is said that numbers don’t lie, but they rarely tell the whole story, and the figures Boehner highlights, while nominally true, do not accurately portray the kind of Speaker Boehner has been. By now, most people are aware of the culture of revenge Boehner has cultivated in the House, but he wants to talk fiscal policy, so let’s talk fiscal policy.

Boehner’s letter highlights the fact that discretionary spending is a little lower now than it was in 2010. True, but it should be remembered that in 2010, we were fresh off one of the biggest recessions in U.S. history. Government spending is designed to spike in those years because more people are applying for unemployment benefits, food stamps, Medicaid, and other anti-poverty programs that economists refer to as “automatic stabilizers.”

Additionally, the government was still paying out for big spending programs like the American Recovery and Reinvestment Act and Race to the Top. The point here is that 2010 spending levels were artificially high due to temporary programs that were always going to wind down regardless of who was Speaker. It’s disingenuous for Boehner to take credit for spending reductions he had nothing to do with.

Even with 2010 being an outlier in terms of spending, according to the Office of Management and Budget, the government still spent about $50 billion more in 2014, and is projected to increase spending by at least $200 billion every year through 2020. The fact is that spending is still growing at an incredible rate, and Boehner has done little or nothing to stop it.

Boehner’s actions as speaker are hardly those of a fiscal hawk. Boehner has always opposed the spending cuts that came as a result of the sequester, and wants to break the spending caps as soon as possible, undoing one of the only meaningful limitations on spending we’ve seen in years. Lest the reader mistake this for idle talk, remember that Boehner supported the Ryan-Murray budget that broke the spending caps, an omnibus spending bill that broke them, and the $1 trillion-plus Cromnibus bill, crafted in secret without input from the party’s real fiscal conservatives.

When he’s not actively promoting legislation to break the spending gaps, he’s going around them using budgetary tricks. For example, the Overseas Contingency Operations fund, which is supposed to be used for military emergencies, has become a slush fund for a wide variety of non-emergency projects. Since funds spent in this way don’t count towards the caps, this is an easy way for the House, under Boehner’s leadership, to spend more without technically violating the sequester.

Ludwig von Mises, one of the greatest exponents of free market economics, was fond of pointing out that statistics are purely historical. The describe what happened without explaining it. John Boehner can continue to trot out cherry picked data as “proof” of his fiscal responsibility, but only through understanding the man’s actions and the motivations behind them.can we really get a sense of what sort of leader he is.

I hear you loud and clear that John Boehner needs replaced. The best way to do that is to back his only conservative opponent in Ohio's 8th district. jdwinteregg.com I am in this voting district and I have known JD Winteregg for several years. He is exactly the person we need in Congress. We need a listener not a speaker. It is not just an Ohio issue. This election will effect everyone in the country. J. D. Winteregg could use our support. He has a powerful opponent. With our help he can beat him.

FreedomWorks announced its support today for House Resolution 385 submitted by Congressman Mark Meadows calling for the removal of John Boehner as Speaker of the House. FreedomWorks CEO Adam Brandon commented:

Thursday was a huge day for anyone following the debate and movement on justice reform, the interest in which has grown substantially in recent days. Out of nowhere, Speaker John Boehner (R-Ohio) gave his support for, perhaps, the most comprehensive justice reform bill proposed in the current Congress.

Thank the Congressmen that stood on principle against Boehner
0
01/06/2015
""
"https:\/\/www.freedomworks.org\/content\/boehners-ten-worst-moments-speaker?social=facebook_share"
""
https://fw-d7-freedomworks-org.s3.amazonaws.com/styles/thumbnail/s3/field/image/Boehner.jpg?itok=i4hsUXkQ
Blog