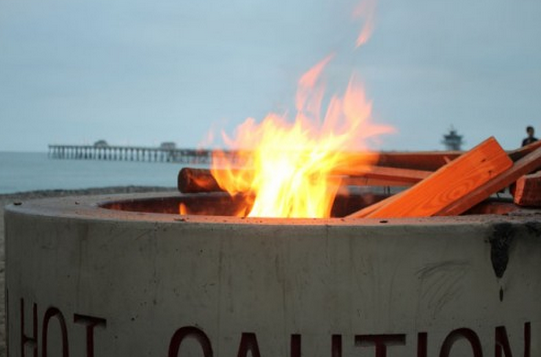 I have great news, readers; California appears to be doing incredibly well. In fact, one might assume that they had a nice balanced budget, low debt, unemployment, and a shrinking number of citizens on food stamps and therefor had the time and money to pursue more regulation. Unfortunately, that's all wrong and California isn’t doing well at all.  But that isn't stopping them from trying to enact more Nanny-state rules. The latest imposition on freedom from the Golden State is the attempted ban on beach bonfires.

Bonfires are as quintessential to California beaches as flip-flops and flexing biceps, but California’s big brother has their eye on putting them out. It turns out that this is part of the epic fight against “global warming.” Dr. Philip Fine of the Southern California Air Quality Management District (AQMD) compared bonfires to diesel trucks, and the group recommended banning open fires and removing existing fire pits. Yes, apparently the AQMD thinks California should also has the money to remove hundreds of fire pits from San Diego to Los Angeles.

That’s not the only cost to Californians, there is also lost revenue to be considered. For example, Huntington Beach alone could lose nearly $1 million in parking revenues per year if tourists choose other locations. Local hotels, restaurants, bars, and tourist traps will also see a loss of business. To fight back, they have begun the “Keep Your Mitts Off our Pits” campaign and petition. As one bonfire fan put it, "There's so many other ways we can protect the environment, this just doesn't seem like a very good one."

Local regulators will be voting on a compromise soon in which there are regulations set for distance between rings and proximity to homes. Fires would still be allowed, however, unless a region already has air that is considered polluted or unhealthy. A state would have to be doing extraordinarily well to go looking for problems like this, and California is not that state.