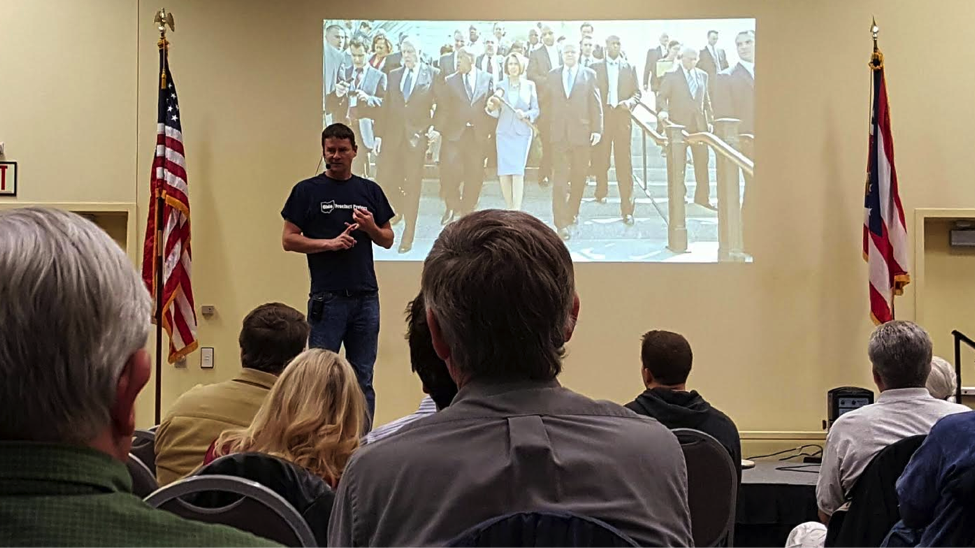 FreedomWorks was on hand this past weekend to help promote our 2015 Ohio Precinct Project “Rally to Recruit.”

This event was co-sponsored by Ohio Rising, and there were about 85 Super Activists from all over the Buckeye State who joined us in Columbus.

This weekend’s occasion was one of several workshops held recently around Ohio to brief liberty-minded activists on the importance of getting involved with party central committee.

Central committees are the backbone of the political parties. Individuals who serve on central committee elect the party leadership, approve the party bylaws, speak on important issues, and most importantly, vote to select and endorse the party’s candidates.

FreedomWorks Director of National Grassroots Outreach, Noah Wall, was on hand to address attendees on the importance of citizen participation at the local party level. He used real life examples of how this was a critical factor in Virginia when conservatives successfully ousted former House Majority Leader, Eric Cantor, and with Rep. Dave Brat (Virginia-7).

At Saturday’s event, we also heard from several Ohio activists about their successes working at the local party level to achieve victory over the establishment. These speakers included Ray Warrick from Warren County, Ann Becker from Butler County, and Heidi Huber from Hamilton County.

On hand were individuals from 39 of Ohio’s 88 counties with a majority of attendees indicating a willingness to run for central committee in their areas.

Over the past several months, we have been in touch with thousands of individuals in Ohio about getting more involved with central committee in our state. Now is the time to step up to support this critical effort. The filing deadline for counties with central committee elections in the upcoming 2016 primary is December 16. After December, and depending where you live, the next chance to engage won’t come again for another two to four years.

*If you are interested in getting involved with the Ohio Precinct Project, visit ohioprecinctproject.com.Ted Stevenot can be reached by phone at (513) 601-9583, or contact Casey Cheap, FreedomWorks Grassroots Assistant, at (202) 942-7621