In 2001 and 2003, Congress passed a series of tax cuts that lowered income tax rates for all Americans. These Bush-era tax cuts expanded the economy by giving all individuals more incentives to create wealth. Unless Congress acts now, all of these tax cuts will expire on January 1, 2011. Unfortunately, Speaker of the House Nancy Pelosi (D-Cali) wrongly claims that these Bush-era tax cuts have not had a positive effect on the economy,

The tax cuts for the wealthiest ... (with income of) $250,000 and above, were the Bush initiative. I don't see any reason why we should renew a tax cut that only gives a tax cut to the wealthiest people in America, increases the deficit, and doesn't create jobs. That doesn't make any sense.

On the contrary, failing to extend the Bush-era tax cuts will actually increase the deficit and the unemployment rate. Nancy Pelosi fails to acknowledge that if all of the Bush-era tax cuts are allowed to expire, marginal tax rates will increase for every working American. The Obama administration has proposed a plan that extends the tax cuts only to families making less than $250,000. Under this proposal, here is how the top two income tax bracket will rise:

Treasury Secretary Timothy Geithner asserted that allowing tax cuts to expire for highest earning Americans would “make some progress bringing down our long-term deficits." Lawmakers hope to raise taxes on wealthy Americans in order to cover up the budget shortfall that was created by runaway government spending. However, this simply will not work. In fact, economists have found that increasing marginal tax rates actually lowers tax revenue. According to the Heritage Foundation,

President Hoover dramatically increased tax rates in the 1930s and President Roosevelt compounded the damage by pushing marginal tax rates to more than 90 percent. Recognizing that high tax rates were hindering the economy, President Kennedy proposed across-the-board tax rate reductions that reduced the top tax rate from more than 90 percent down to 70 percent. What happened? Tax revenues climbed from $94 billion in 1961 to $153 billion in 1968, an increase of 62 percent (33 percent after adjusting for inflation).

It is a false presumption that “soaking the rich” by increasing taxes will raise tax revenues. The Obama administration’s plan to increase marginal taxes for the rich to bring down the deficit fails to factor in human motivation and action. As taught in economics 101, incentives matter. Under Obama’s plan, two-thirds of businesses profits will be taxed at a higher rate of 39.6 percent. As a result, individuals are more deterred from starting new enterprises. Employers will be forced to pay more in taxes and will have less to invest in expanding their business by creating new jobs. In the end, these higher taxes will discourage production. Why take an enormous risk with your capital if the government takes away nearly 40 percent of your potential profit?

Not only do the direct income tax consequences of higher tax rates on those in the highest brackets lead to higher deficits, the indirect effects magnify the tax revenue losses many fold. As a result of higher tax rates on those people in the highest tax brackets, there will be less employment, output, sales, profits and capital gains—all leading to lower payrolls and lower total tax receipts. There will also be higher unemployment, poverty and lower incomes, all of which require more government spending. 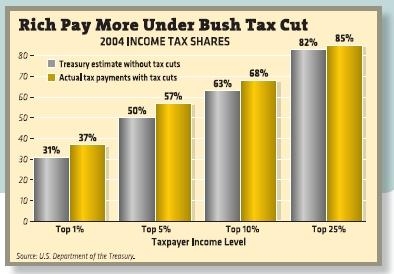 In reality, higher tax rates will alters incentives which lead to larger deficits. If the Obama administration increases marginal tax rates for high income earners, tax revenue will likely decrease. The graph above shows that the Bush-era tax cuts increased production and innovation which led to the rich paying a larger share of taxes. According to the U.S. Department of Treasury, the top 1 percent of income earners will pay 37 percent of tax revenue with the current 35 percent marginal tax rate. Under Obama’s proposal, these individuals will only pay 31 percent of tax revenue with the proposed 39.6 percent marginal tax rate. President John F. Kennedy understood that “reducing taxes is the best way open to us to increase revenues.” If Congress fails to extend the Bush-era tax cuts to high income earners, the nation will suffer by reducing employment and output while increasing the budget deficit.

0
09/19/2012
According to Obama, the Government Built Your Business
"https:\/\/www.freedomworks.org\/content\/according-obama-government-built-your-business?social=facebook_share"
null
https://fw-d7-freedomworks-org.s3.amazonaws.com/styles/thumbnail/s3/te_social_media_share/fw_default_0.jpg?itok=35IWEBMb
Blog

US Economy threatened in wake of Obama's Taxmageddon

Obama seems to have one goal in mind this election: creating an even greater gap between Republicans and Democrats. I must admit, he’s doing a great job of it, stoking class warfare and feeding the media and his supporters left-wing lies. Did you hear the GOP is nothing but a bunch of wealthy and corrupt people that have no interest in the good of the lower and middle class citizens?

Dear Senator,FreedomWorks is a leading grassroots organization with over a million members fighting for lower taxes, less government, and more freedom.  I am writing today to offer our support for the general framework for the compromise tax proposal announced by President Obama and leaders in Congress.  It is not our ideal proposal, but it is worth supporting while concurrently pushing for a major overhaul of the entire tax code and major spending reductions.

House Speaker Nancy Pelosi (D-CA) and Senate Majority Leader Harry Reid (D-NV) have made it clear that they will strive to raise taxes on all families making over $250,000 annually on January 1st. According to Nancy Pelosi, “I see no justification for giving a tax break…for the wealthiest people in America…the tax cuts at the high end have increased the deficit enormously.”

Earlier today, Minority Leader Boehner pressed Nancy Pelosi to commit to an up-or-down vote on legislation that would stop all of the upcoming 2011 tax hikes before Congress adjourns for the fall.

During President Obama’s speech in Cleveland, he indicated that he still wants to raise taxes on small businesses making over $250,000 a year on January 1st. He criticized House Minority Leader John Boehner for wanting to extend  tax cuts to the "rich" claiming that these were "not new ideas." He stated: