The Canary in The Coal Mine Is Gasping For Air

The Coal Mine Canary Is Gasping For Air

There is a growing trend.  An increasing number of high profile Democrats have been extricating themselves from association with the president, and now even the Democratic Party, itself.  Pick your metaphor…Peggy Noonan’s House of Cards, a sinking ship, a canary in a coal mine…the tropes of our economy, and those responsible for the health of it, are all crumbling, sinking, or gasping for breath.  As hard as the Obama Administration is spinning the story, reality has arrived. 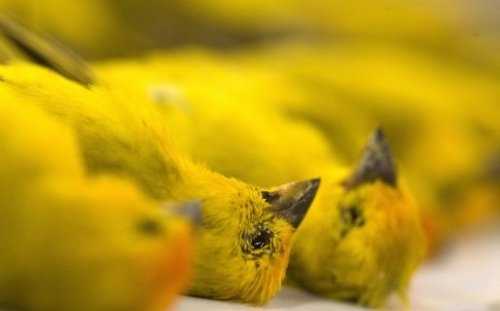 The Stock Market
On Thursday, the DOW dropped 2%, losing over 250 points and marking the second biggest drop of the year.  Dramatic drops in production and profits across the manufacturing and energy industries have investors rightfully spooked.

Investors yanked money out of stocks Thursday after new reports from the U.S. and China pointed to a sharp slowdown in manufacturing.  The Dow Jones industrial plunged 251 points, the second-biggest drop this year.  Losses in energy and materials companies led a widespread rout on the stock market. The Dow started sinking after 10 a.m., when the Philadelphia branch of the Federal Reserve reported a sharp contraction in manufacturing in the Northeast. The losses accelerated throughout the day.  "The news has been horrible out there," said Uri Landesman, president of Platinum Partners. "The U.S. economy is slowing down. And China's growth is definitely under question."  The bad news kept piling up as the day went on. Mining and other companies that made basic materials fell hard after prices for commodities such as copper and oil dropped. Goldman Sachs analysts advised their clients to bet that stocks would fall, and speculation swirled that Moody's would cut the credit ratings of 17 banks.

According to Business Insider,

Today’s rating actions conclude the review initiated on 15 February 2012 when Moody’s announced a ratings review prompted by its reassessment of the volatility and risks that creditors of firms with global capital markets operations face. In the past, these risks have led many institutions to fail or to require outside support, including several firms affected by today’s rating actions. Today’s actions, however, reflect not only the credit implications of capital markets operations. They also reflect (i) the size and stability of earnings from non-capital markets activities of each firm, (ii) capitalization, (iii) liquidity buffers, and (iv) other considerations, including, as applicable, exposure to the operating environment in Europe, any record of risk management problems, and risks from exposure to US residential mortgages, commercial real estate or legacy portfolios.

Lowered GDP Projection and Higher Unemployment
And Moody’s isn’t the only one busy downgrading.  The Federal Reserve has just lowered its expectations of economic growth from an already sickly GDP, and is seeing higher unemployment rates heading our way.

The outlook for jobs, corporate profits, the banking industry, and the U.S. economy is negative and those monitoring trend indicators keep lowering the projected benchmarks.  The circling vortex of the European debt crisis is moving to the U.S. and reality has turned obnoxious enough that even the Liberal media are no longer willing, or able, to deny it.  The private sector is not “doing fine” and the voters are getting wise to the lying and whining coming out of the Obama White House.

Obama's Socialist masquerade is crumbling and his usual grandiloquence is senseless, and "meandering"; his halting and stammering has him labeled by the media as a president "dazed and confused".  It's no wonder Obama routinely avoids the White House press corps.  This week, former Democratic Governor Ed Rendell told the Washington Free Beacon that Obama's "free pass" from the media has been rescinded.  With his sanctuary removed, the Administration has had to concoct a new medium for spinning its messy stockpile of failed policies.  Thus, emerged a reinvented President of the "Newfangled Thing", better known to the rest of us as social networking.  For Obama, reality sucks and his canary is dying, so he has escaped to cyber-space.  There, he can pretend to be anyone he wants to be, even if it's not who he really is.

Obama's policies are toxic and his canary is gasping for air.