Second only to Texas, North Dakota recently secured its spot as America's second largest oil producer. North Dakota's energy boom is a direct result of fracking the Bakken formation.  This post is the first of two parts that explore how fracking has affected North Dakota. Before we get to the economic impact of the North Dakota energy boom, we'll take a look at the basic mechanics behind it all.

The Bakken shale oil field is part of a huge formation covering approximately 200,000 square miles.  It covers the northwest corner of North Dakota, the northeast corner of Montana and a significant chunk of Saskatchewan, Canada, as the image beneath indicates. 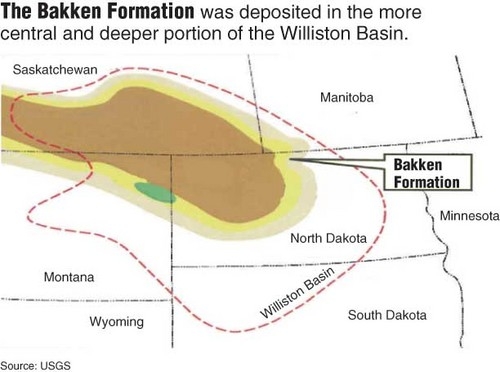 So what is fracking? Contrary to what most people think, oil is not found in vast pools beneath the surface; it’s found in solid rock formations. In order for rock to yield economically produceable oil, it must have two qualities: porosity and permeability.

Shale is one of the most common sedimentary rocks. Sometimes it contains an abundance of oil, but it’s not permeable, meaning oil and natural gas cannot easily flow through the rock for extraction. To extract oil and natural gas from shale, a well is drilled into a shale formation. Rather than drilling straight down, the well kicks off laterally. A high pressure pump is then used to break the rock (this is where ‘fracking’ gets its name, to hydraulically fracture the rocks is colloquially, ‘fracking’). The gaps in the rock created by the pressure allow the oil and gas to escape into the well bore.

Any controversy surrounding fracking is based on false assumptions. Environmentalist claims that fracking can contaminate the water table, that fracking fluid is harmful to water supplies and that fracking causes earthquakes are simply untrue.

As Robert W. Chase pointed out in an article published in April:

Some mistakenly say the practice [fracking] can pollute water tables which lie just a few hundred feet or less below the surface.  Fracking is done well below 7,000 feet, and solid rock separates the oil and gas deposits from shallow groundwater aquifers.  This rock buffer makes contamination from fracking virtually impossible.

In addition, wells are built with at least four layers of steel casing and concrete and are cemented in place, creating a solid divider between gas production and any fresh - water aquifers.  Energy Secretary Steven Chu recently asserted: "We believe it's impossible to extract shale gas in a way that protects the water, that protects people's health.  We can do this safely."

Environmentalists also enjoy claiming that fracking fluid is a toxic mix and that if it were to permeate the water table, we would all be poisoned. While 99.5% of fracking fluid is nothing more than water and sand, the remaining is a chemical mix.  Never mind the fact the steel casings surrounding the top portion of our wells, or that fracking fluid is apparently potable, as a Haliburton executive so famously illustrated, that .5% will be our doom -- or so they'd have us believe.

Back in April, Vice President Biden claimed fracking can cause earthquakes. Unfortunately, scientists disagree. In an interview with NPR, William Leith, seismologist with the U.S. Geological Survey said, "Fracking itself probably does not put enough energy into the ground to trigger an eathquake.  They're not a safety hazard. That's really not something that we should be concerned about."

The EPA and Fracking

Even the most overbearing federal agency, notorious for halting drilling operations because a lizard might be harmed, agrees that fracking isn't an environmental hazard. The EPA investigated a claim in Pennsylvania that drinking water was contaminated by fracking and found the claims to be unfounded.   The EPA came to identical conclusions in Texas and Wyoming. Even fracking rules published this year by the EPA essentially allow oil and gas companies to carry on with business as usual, passing on a rare opportunity to strike an economic blow for the sake of environmental insanity.

A report by the Guardian released last week asserted:

U.S. reliance on the Gulf for its oil -- and its consequent need to maintain a dominant presence in the Middle East to keep the oil flowing - has been one of the constants of the post-1945 status quo. That could be turned on its head.

It's been dubbed "the homecoming." After decades in which the hollowing out of American manufacturing has been chronicled in Bruce Springsteen's blue-collar laments, cheap energy is being seen as the dawn of a new golden age for the world's biggest economy.

The reason is simple.  The US is the home to vast shale oil and gas deposits made commercially viable by improvements to a 200-year-old technique called fracking...

But energy independence isn't the only advantage to further exploration of America's natural shale oil reserves.  If the dramatic economic upswing in North Dakota is any indicator, fracking might be just what America needs to get our economy headed in the right direction.

The second part of this article will closely examine North Dakota and the economic changes resulting from fracking the Bakken reserve.