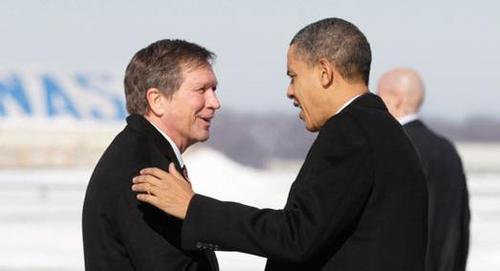 Of exploding federal spending, CBO wrote, “The increase in outlays reflects substantial growth in the cost of the largest benefit programs — Social Security, Medicare, and Medicaid — and in payments of interest on the government’s debt; those increases would more than offset a significant decline in discretionary spending relative to the size of the economy.”

The Obamacare Medicaid expansion will cause damage beyond further busting DC’s budget, as The Buckeye Institute, Opportunity Ohio, Media Trackers, Foundation for Government Accountability, and others explained while Kasich, a Republican, tried to ram the policy through Ohio’s legislature.

CBO listed “expansion of eligibility for Medicaid” as the second most important Obamacare provision affecting the nation’s labor supply.

“In particular, studies of past expansions or contractions in Medicaid eligibility for childless adults have pointed to a larger effect on labor supply than CBO had estimated previously,” CBO wrote.

The left-leaning Urban Institute has estimated that 90 percent of Ohioans eligible for Medicaid under the Obamacare expansion will be able-bodied childless adults, a point The Heritage Foundation’s Ed Haislmaier made during Ohio House testimony last spring.

Heritage, like every other right-of-center think tank, was ignored by the Kasich Administration and by the state’s rabidly pro-expansion press.

CBO’s February 4 report also discredited assurances from Gov. Kasich that Medicaid expansion is separate from Obamacare and that Ohio would save taxpayers no money by refusing to expand Medicaid.

“Medicaid spending is expected to accelerate in 2014, because about 25 states have expanded coverage significantly in keeping with provisions of the Affordable Care Act,” CBO wrote.

Elsewhere in the report, CBO noted that new estimates did not take into account any “decisions by states about expanding Medicaid coverage” since last December, an acknowledgement that Obamacare’s increased Medicaid costs rise with each state that enacts the expansion.

Media Trackers has sought to explain this simple fact to a seemingly indifferent press since last February. Cato Institute health policy expert Michael Cannon refuted Kasich’s position in March 2013 testimony before the Ohio House, but the media chose to ignore him.

The left-leaning Kaiser Family Foundation’s cost projections from 2012 — and a direct quote from last March — also affirm that Kasich’s talking points are false, but Gov. Kasich continues to misrepresent how the new entitlement benefits will be paid for.

See a list of other findings from the CBO report that are not so much revelations as confirmations of years-old conservative warnings about Obamacare.