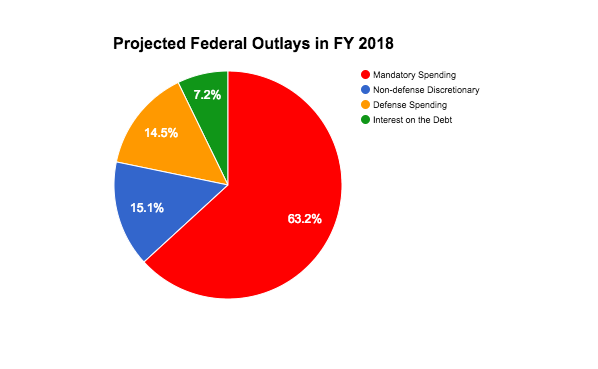 Mandatory spending, including entitlements, and interest on the debt represent 70 percent of all federal spending in FY 2018

The Congressional Budget Office (CBO), on Tuesday, released its first budget outlook report of the new year, offering a look at the fiscal picture for the next ten years, FY 2018 through FY 2027. It isn't pretty.

In a blog post last week, FreedomWorks looked at the budget picture from FY 2017 through FY 2026, noting that President Donald Trump's proposed $10.5 trillion in spending cuts are merely a good start to addressing the budget deficit. The reason is because even if Congress eliminated all non-defense discretionary spending, the federal government would still run a budget deficit of nearly $2.1 trillion over ten years.

The latest CBO report shows, as one would expect, that the budget picture is that much worse. While discretionary spending, including defense, as a percentage of is projected to decline between FY 2018 and FY 2027, mandatory spending, including Social Security and Medicare, and interest on the debt are expected to rise, though slightly. Still, the pie charts below offer a peek at the overall trend expected as Congress kicks the can down the road on mandatory spending and the startling increase in publicly held debt, which, together, represent nearly 75 percent of all federal spending.

Looking past the FY 2018 through FY 2027 budget window, the CBO described the budget situation as "significantly more daunting," noting that "budget deficits rise steadily" through 2047. Those projections are given with uncertainty given that it's a 30-year projection, but it does offer a glimpse of the future if Congress doesn't approach the issue of entitlement reform seriously.

"Although long-term budget projections are highly uncertain, the aging of the population and growth in per capita spending on health care would almost certainly boost federal spending significantly relative to GDP after 2027 if current laws generally remained in effect. Federal revenues also would continue to increase relative to GDP under current law, but they would not keep pace with outlays," the report explained. "As a result, CBO estimates, public debt would reach 145 percent of GDP by 2047 (taking into account the effects on the economy of the rising debt), higher than any percentage previously recorded in the United States."

"Moreover, debt would still be on an upward path relative to the size of the economy in 2047, a trend that would ultimately be unsustainable. To avoid the negative consequences of high and rising federal debt and to put debt on a sustainable path, lawmakers will have to make significant changes to tax and spending policies—increasing revenues more than they would under current law, reducing spending for large benefit programs below the projected amounts, or adopting some combination of those approaches," the report added.

By 2047, according to the CBO, publicly held debt will approach 150 percent of the gross domestic product (GDP). In FY 2017, debt held by the public is projected to be 77.5 percent of GDP.

Again, it's great that the White House and congressional Republicans want to reduce non-defense discretionary spending, but in the ten-year budget picture offered in the latest CBO report, that represents roughly 12.7 percent of all federal outlays during this period. Unfortunately, too few are approaching mandatory spending with any real urgency.