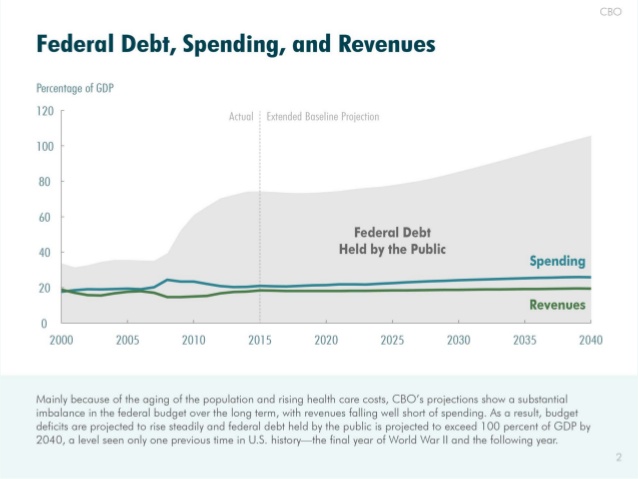 This week, the Congressional Budget Office came out with its Long-Term Budget Outlook for 2015. The report foreshadows growing deficits, mounting debt, and economic harm if the status quo is allowed to continue.

The debt crisis has been well documented and is well understood. Despite this, Congress has not been inclined to take proactive action to address the problem. Instead, Congress is acting like a bunch of college kids putting off a paper to the last minute.

Moving from one deadline crisis to another is now standard operating procedure for Congress. From raising debt ceilings to reauthorization of the Patriot Act, our leaders continually put work off until they absolutely must act.

There were grave concerns from some in Congress, but especially the public, when the country ran deficits of more than $1 trillion in the years immediately after President Obama took office. But now that deficits have returned to the $400-500 billion range, somehow viewed as manageable deficits, the calls for reform have quieted. But the CBO sees this as only a lull in large deficits, and that danger is just around the corner.

While the 50 year average of deficit to GDP has been 2.7 percent (the same as the expected deficit in 2015), the CBO expects this number to rise to 5.9 percent by 2040 if current law continues. This percentage would be higher than any other deficit from 1947 to 2008. Likewise, the CBO forecasts the national debt as a percentage of GDP to climb from 73 percent to 77 percent by 2025 and then explode to 103% by 2040. The latter figure would represent the largest figure in our history outside of 1945 and 1946.

According to the CBO, our mounting debt leads to three major problems. First, federal borrowing would draw money away from private investment. Second, investors would begin to demand higher interest rates. Third, there would be less money available to Congress when they need to respond to actual emergencies.

Excessive debt also leads to concerns about the overall health of the economy. As the CBO notes: “[b]ecause debt is already unusually high relative to GDP, further sustained increases could be especially harmful to economic growth.”

The debt problem and dramatic increase in deficits is being driven by entitlement spending, mainly Social Security and the major health care programs. There has been some talk of reducing wasteful or duplicative spending by Congress to reduce the deficit. But any reforms that do not address entitlements would have little effect on the deficit or debt problem.

By 2040, entitlement spending is expected to rise from 6.5 percent of GDP to 14.2 percent and interests payments on our debt from 2.0 percent to 4.3 percent. All this entitlement spending is crowding out discretionary spending. The CBO projects all other spending to drop from the 50 year average of 11.6 percent of GDP down to 6.9 percent by 2040. This means less money will be available for building infrastructure and national defense.

To get our debt in line with the 50 year historic average of 38 percent of GDP, some drastic changes would have to be made. The CBO report shows that revenues would have to be increased by 14 percent, or spending would have to be cut by 13 percent. In 2016 dollars, this equates with $480 billion. If the revenue increases were to be adopted it would mean an increase in taxes of $1,700 for a household in the middle quintile.

The longer Congress delays acting on the problem, the tougher the problem becomes. The CBO report explains, “. . . waiting would mean a greater accumulation of debt, larger changes needed to achieve a particular long-term outcome, and more uncertainty about future policies . . . .” A delay of 5 years would require an additional 0.6 percent of GDP increase in revenues or decrease in spending, a delay of 10 years would require 1.6 percent.

Despite this mounting concern, Congress has shown little interest in tackling the debt problem or entitlement reform. Congress has a great upcoming opportunity to enact entitlement reforms. A CBO report from 2014 shows that Social Security Disability Insurance will exhaust its fund in 2017. When the fund’s balance falls to zero and revenues are insufficient to cover benefits, which they will be, the Social Security Administration will no longer have legal authority to pay out full benefits.

The CBO has made its warning clear. If we follow down the path we are on, we will face mounting debt and slow growth. Further, the longer we wait, the harder reforms become. If members of Congress want to be looked upon as leaders of our country, they need to lead on this issue of growing concern. Waiting till funds are exhausted or investors are unwilling to borrow more money is not an option. Congress needs to be proactive and get us back on a long-terms sustainable path.