Colin Powell and His Search For Relevance 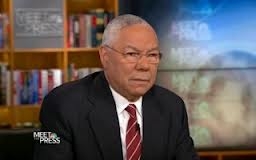 Former Secretary of State Colin Powell was featured on “Meet The Press."  Powell, who identifies himself as a Republican, has faced much scrutiny from conservatives for endorsing Obama, not to mention his consistent attention seeking tactics at the expense of the GOP.

Powell was asked by host David Gregory to tell on what basis on which he was a Republican and if he left the GOP or if the GOP left him. While Powell refused to clarify on exactly what makes him a Republican, he did manage to give a short, but weak response in which he described himself as a “moderate.” Powell referred to the GOP as having “an identity problem.” He pointed to immigration, health care, voter ID laws, and the changing demographics (rising numbers of Hispanics, Asian-Americans, blacks) as examples.

While it is absolutely true that the GOP must re-evaluate its approach and methods of messaging to minority communities, the retired general was vague on specific proposals and ideas to help reinvigorate the party. Instead, the former Chairman of the Joint Chiefs decided to regurgitate the liberal talking points, claiming the GOP shows hostility or resentment towards minorities.

“There’s also a dark vein of intolerance in some parts of the party,” Powell retorted. “What do I mean by that? What I mean by that is they still sort of look down on minorities.”  Has Gen. Powell forgotten the fact that he was nominated as the first African-American Secretary of State by Republican President George W. Bush, who also happened to have the most diverse cabinet in presidential history? Bush's successor, however, has neglected this attribute.  After Obama's picks for the Treasury, State, Defense and CIA were announced, the President came under some criticism from pundits and commentators on the left and right bringing to center attention the lack of diversity in his choice cabinet.

I'm intrigued to know if Powell thought it to be intolerant when Sen. Harry Reid claimed Obama lacked “negro dialect” or when Joe Biden said Obama was the first “clean and articulate” African-American.

Powell used an opportunity to take a jab at comments made by former Alaska Gov. Sarah Palin. ”When I see a former governor say that the president is ‘shuckin’ and jivin,’ that’s a racial-era slave term,”he exclaimed. This is an absurd claim by Powell. Palin was simply referring to the president's inconsistent descriptions of the Benghazi terrorist attacks, and if Powell figured that to be slave-term usage, his uber sensitivity has served as a substitute for facts and rationale debate.

Powell also implied that the GOP was heavily involved in the “birther” movement. As astute and knowledgeable as Mr. Powell is, I was a bit surprised he was unaware of the fact that Phil Berg, an ex-deputy attorney general for Pennsylvania and 2008 Hillary Clinton supporter, filed a lawsuit alleging that Obama was ineligible to be a presidential candidate. On these grounds, would Secretary Powell deem Mr. Berg also hostile to minorities?

By these remarks and inserting himself back into the conversation, is Colin Powell simply attempting to become relevant in the GOP once again? If so I question the strategy.  I mean, who better to speak on behalf of all Republicans but a man who voted for Barack Obama, not once, but twice?

His refusal to highlight the class warfare that’s been elevated in the Obama administration, the higher taxes implemented under Obamacare and the fiscal cliff deal and Obama’s horrible record regarding the economy, makes Powell appear to be a steward of the Democrat party, barring the (R) behind his name.  Where is his mention on the hostile job market and rising unemployment rate in the black communities under the first black president?

He has a stage, and millions of black Americans admire and respect him for good reason.  But, if Powell truly wants to be relevant again, and help the party he claims to be part of, might I suggest that he actively involve himself in transforming the GOP instead of using liberal means to bash it?

Powell stopped being a Republican even before Obama became a senator . He tries to get by with calling himself a moderate , but actions speak louder than words . I don't trust his words any longer , and I would caution anyone else to check his recent record of statements before giving him any creedence .