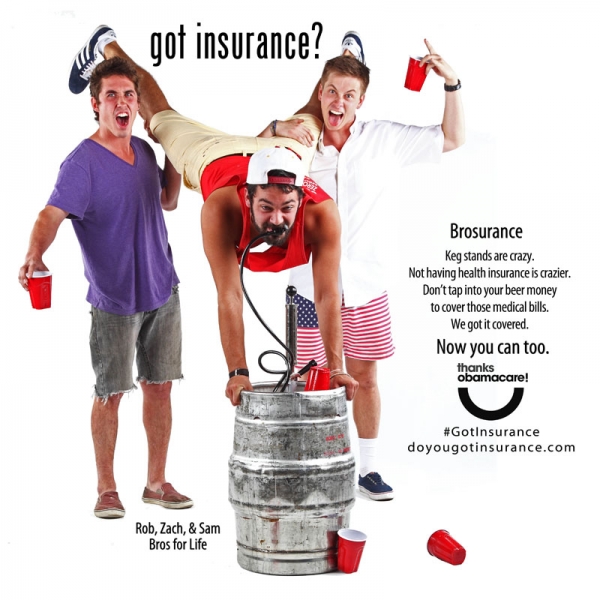 The deeper we fall into the President’s progressive rabbit hole, the more ridiculous the images get. Take Colorado’s latest effort to con encourage young, healthy Americans to sign up for Obamacare.

The Centennial State launched its “Get Covered” effort by paying nearly naked models to prance around downtown Denver in flesh-toned skivvies. How this stunt escaped the notice of ever-vigilant feminist groups is beyond me, but it apparently had little impact.

Despite spending more than $21 million in taxpayer funds to promote the Colorado exchange, a paltry 226 people enrolled in the first week. It’s early yet, but a cost of $93,000 per victim is bad, even for the government.

The first in a series of ads steals the trademarked “Got Milk” tagline, repurposing the catchphrase to sell really bad insurance. The ad then insults their target market: the healthy young people Obamacare needs to pay for the health care of older Americans.

Keg stands are crazy. Not having health insurance is crazier. Don’t tap into your beer money to cover those medical bills.  We got it covered. Now you can too.

If you like your keg, you can keep your keg. But why blow your dough on a liver transplant when you could spend it on binge drinking — amirite, broheims? ::high fiving followed by chest bumping followed by passing out::

Dean Wormer said, “fat, drunk, and stupid is no way to go through life, son.” But to our bumbling central planners, that is the ideal candidate to recruit as a lifetime ward of the state. Give a bro a beer, he’ll love you for a day; teach him how to keg stand and he’ll vote Democrat forever.

Two of the losers in the brosurance ad appear in another equally moronic appeal to underemployed millennials. “Yo Mom, do I got insurance?” bro #1 asks as the copy explains that this mid-20s manbaby somehow sustained a massive head injury during a simple game of golf.

These latest Obamacare pitches are an embarrassment. Not that long ago, the only U.S. government ads targeting young men encouraged them to “be all they can be” or perhaps join “The Few. The Proud. The Marines.”

Today, we’re telling twentysomethings they should just throw a kegger since mommy can fix any boo-boos they get during their 4th anniversary funemployment party.

Perhaps I'm wrong and the government’s ad agency is on to something. If anyone is stupid enough to respond to these ads, they might be stupid enough to pay the exorbitant rates under Obamacare. Instead, they should refuse, and instead find the plan that works for them.