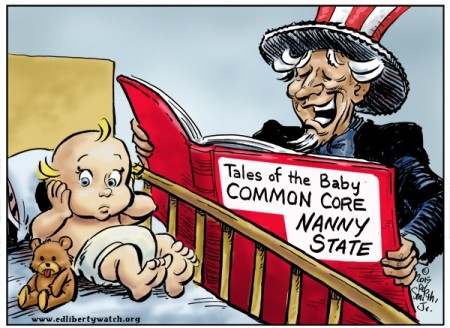 Common Core is crippling Roman Catholic schools in New York as they attempt to not only keep up with their own academic standards and spiritual development but also include the new controversial material of Common Core.

The Diocese of Albany recently stated that Catholic schools will attempt to "reduce the frequency of the Common Core-aligned tests while sticking with the standards." The statement issued wanted to make it clear that "although the standards of the Common Core itself are good, the collateral pieces have caused great strife for families and teachers," Albany Superintendent Michael Pizzingrillo said. According to an interview with ABC News:

"Right now, Catholic schools are still trying to figure out how they respond to the Common Core and how deeply they embrace it," said Dan Guernsey, director of K-12 programming at the Cardinal Newman Society. The focus, he said, has to remain on the development of students' "mind, body and spirit."

Almost 1.9 million students around the U.S. are enrolled in 6,568 Catholic schools, most of them elementary schools, according to the National Catholic Education Association. It is incredibly alarming that now not even religious based schools are unable to escape the overreach of this intrusive core curricula adopted by individual states. This issue has sparked the anger from other religious Americans throughout the country as well - one mother in Pennsylvania, whose family were members of the Unitarian Church, wrote a lengthy letter to her children's school explaining why she was using her legal right as a parent to opt her kids out of the mandatory Common Core testing they were intended to take. In her letter, she noted explicitly at one point that:

Imposing constant churn and disruption on our most vulnerable students in the pursuit of higher test scores is not education justice. Worse, the relentless high-stakes-testing has served to re-inscribe inequality.

According to Sister John Mary Fleming, executive director for education at the United States Conference of Catholic Bishops, "many parents are listening to the news. They see the political charge...What this situation has done is created an opportunity for Catholic schools to review our mission: What is our mission and how does the curriculum support that mission?"

Currently, the conference wants to review the Common Core standards but notes that "rejecting them could put students at a disadvantage later in high school." This point, however, is a false flag, since we need to consider several major factors regarding what they consider a real "disadvantage":

The Albany diocese's decision to re-evaluate their involvement with Common Core is going on at the same time as Gov. Andrew Cuomo's call for "a total reboot" of the curriculum, after New York joined with several other states with a populace highly rejecting the notion of an experimental and obviously progressive agenda . It was reported recently that a whopping 20% of New York public school students opted out of the mandatory math and English assessments last spring. This trend has been spreading like wildfire, though, and because of the hefty level of opt outs from students, more public schools are being threatened with severe budget cuts and other forms of punishment for a lack of test participation.

What this incursion has shown is that no matter where you have your child go to get an education, these harsh progressive initiatives aimed at indoctrinating kids into a neo-socialist, relativist mindset. This "Obamacare" of education has shown a positive trend in the increase in homeschooling though throughout the country, showing the government and corporations backing Common Core that in a last attempt to draw a line in the sand, parents are willing to pull their kids out of the system in order to guarantee them a better educational opportunity in the long run.

With Common Core creeping into the fabric of religiously based schools, how further will this intrusion go before these institutions finally say enough is enough?