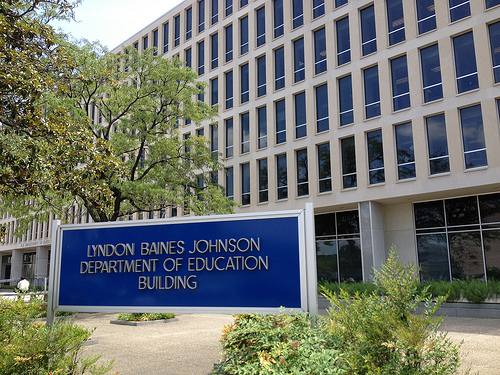 The Department of Education wants more power over colleges.

If the above list isn’t self-evident proof that the federal government is incapable of good education policy, consider the implications of the president’s proposal. Under Obama’s plan, the Department of Education would be able to arbitrarily assign scores to universities based on whatever criteria they want, then deny funding based on these scores. This would allow near complete discretion on the part of federal regulators, and would would essentially allow the Department of Education to make unilateral demands that educational institutions do whatever they want, using the threat of withholding funding as leverage.

The use of federal funding as a bullying tactic for state and local government is the same loophole the feds used to get around the constitutional fact that education is a state and local issue, not a federal one. The purse strings, which are supposed to be controlled by Congress, not the president, are a powerful motivator.

Whereas Common Core focuses on academic standards and performance, the proposed rating plan stresses access and affordability. Among the criteria advanced are graduation rates, retention rates, and the rates of accepting disadvantaged students, but overall the proposal is very short on specifics.

Offering money as a condition for certain outcome is a sure way to see more of that outcome, at least on paper. What this means in practice is that whatever the specific criterion for funding is gets precedence over anything actually meaningful. People respond to incentives, often by trying to game the system.

In his excellent book Who’s Afraid of the Big Bad Dragon?, author and education expert Yong Zhao shows how this kind of system has backfired in China, a model that too many American politicians unfortunately want to emulate. China boasts the most patents of any country, and the most scholarly articles published, largely because the government demands performance in these areas. Far from being a success, however, the incentives put in place by a demanding and oppressive government mean that , while millions of patents are filed, few are of any actual value. While thousands of academic papers are written and published, most or bought or plagiarized. The obsession with meeting quotas supersedes any genuine attempt at innovation.

The federal government can demand a certain graduation rate of colleges, and they can probably get it, but it will be achieved by lowering the standards for graduation, passing otherwise unqualified students in order to keep the numbers up. On the other hand, the market is a far better determiner of student outcomes, because parents and students decide which institutions to patronize based on a wide variety of desirable criteria, not blind obedience to selected statistics.

The federal takeover of education will crush any individuality in higher education, and impose the kind of soulless conformity we see in totalitarian states like that of China. The only way to achieve better educational outcomes that actually matter is with greater student choice, and more localization of control. Obama’s plan would do the exact opposite, applying the same misguided premise of Common Core to higher education as well.

What type of bovine feces are you attempting to spread here? " ...the Department of Education would be able to arbitrarily assign scores to universities ..." What part of the difference between a community college (a.k.a., Ma and Pa Kettles country school) and Cal Tech do you not comprehend?

Universities and colleges have applied for (and received) government research grants since before WWII. I've written many proposals myself and received several grants. Getting government research money is nice, but the government has never had any controi over curriculum, just over areas to be researched and studied. Once again I see a non-issue being created for purely propaganda purposes by the believers in Ayn Rand.

Sir, I don't know you or your credentials and frankly after your writing don't trust that you have done what you say you have done. Anyone can anonymously spout a lot of crap and it is certainly obvious that you have not done your research on the average Community College. I will say this, your opening statement trashing any university that doesn't happen to be near a big city of your approval is a foolish mistake and makes you look like a bigot. You have obviously not been following up the damage that is already being done by Common Core and this college standard outcome is simply a natural and logical follow up to that effort. Common Core opens the door to shutting up any discussion that the administration in power happens to disagree with by virtue of "setting new standards". You may note that a good number of Community Colleges offer Bachelor's programs and not at the ridiculous and exhorbitant costs of attending a University such as Cal Tech or the "Ivy League" institutions in the Northeast, all of which were once great institutions of learning and are now reduced to producing thoughtless idiots and political hacks....all we have to do is look at the White House to determine that!! Along with the exhorbitant costs come tenured and ridiculous professors who portend to be educators but are actually radicals hiding behind the curtain of the "Pompous-Ass" type of elitists who believe they know best for everyone and of that Pompous Ass group has come the same fools who felt Common Core was actually a good, or perhaps they just have an agenda. I am confident that the latter is the truth. and believe me, I'm not a conspiracy theorist by any means. Common Core sir, has nothing to do with learning, and you can trust this....Cal Tech or other institutions that accept these standards in order to receive money from the Federal Government will go downhill and quickly.....