Last week, the International Monetary Fund (IMF) announced plans to bailout Ireland. Since U.S. taxpayers pay 17 percent of the IMF’s funding, we are the world’s largest contributors. This means that American taxpayers will be on the hook again for billions of dollars to prop up failed economic policies overseas. With the largest share of voting power, the U.S. government has the authority to veto any IMF bailout. For the sake of American taxpayers, Congress should reject any effort to bailout profligate European countries.

Earlier in the year, the U.S. government sent 145 billion taxpayer dollars to Greece. The economic fiascos in Greece and Ireland are remarkably similar. Both countries spent more money than they could reasonably afford. In Commentary, Jim Glassman writes:

Greece has been behaving as if it were truly rich. The secret was borrowed money. At the end of 2009, the country had a public debt equivalent to 114 percent of its GDP… Meanwhile, Greece consistently violated the EU’s rules for minimum deficit and debt levels. The Greeks, however, lived better and better, with an official retirement age of just 58.

Unfortunately, Ireland’s government also made a series of irresponsible and costly decisions. On the heels of the financial crisis, Ireland responded by increasing the size and scope of government. The Carnegie Endowment for International Peace points out that “European monetary policy…was far too loose for Ireland.” Just as we saw in the US, Europe’s loose monetary policy caused the supply of credit to explode followed by a foreseeable crash. This bust is an inevitable consequence of excessive credit creation by central banks.

The best solution is to let the market self-correct. This may be a costly and sometimes painful process but increased government involvement will ultimately worsen the problem. However, Ireland wrongly responded to the crisis by “injecting” more money into the economy and purchasing trouble assets. As the Carnegie Endowment further discusses,

These measures obviously took a heavy toll on government finances. At 13.9 percent of GDP, estimated financial sector stabilization costs through 2009 are the highest of any advanced country.

In many ways, Ireland and United States reacted in similar ways to the financial crisis. The US has recently passed a series of poor economic policies—TARP and the “stimulus”—that have failed to produce long-term recovery. We may be following in Ireland’s footsteps.

As the graph below shows, Ireland has spent money at unsustainable levels for the past few years. 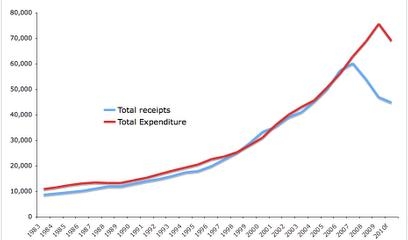 Instead of massively cutting spending, Ireland is asking the European Union and IMF—thus American taxpayers— for about 95 billion Euros or $130 billion. Even still, fixed-income strategists at Lloyd TSB Corporate Markets Charles Diebel and David Page state that “the markets currently have virtually zero confidence that the bailout in Ireland will solve the European crisis.” They’re right. Since a taxpayer bailout would encourage reckless behavior, it will actually make fiscal problems worse in the long run.

It is hard to justify that those European countries with foolish economic policies should be rewarded overseas taxpayer funds. The Wall Street Journal reports “the concern is that by rescuing a country that for years flouted fiscal discipline, the European Union would be encouraging such behavior rather than discouraging it.” If Ireland receives a bailout, it is reported that Portugal and Spain may be next in line to seek funding.

We cannot allow this to continue any longer. Congress should veto all proposed international taxpayer bailouts that only reward poor economic decisions. Ireland needs to take full responsibility for their actions. Not force us to pay for their mistakes.

What Would You Do with a Billion Dollars?

One of the most egregious features of ObamaCare are its so-called risk corridors, a fancy name for a large scale bailout of big insurance companies expected to cost taxpayers at least $1 billion.

Key Vote NO on More Taxpayer Funding for the IMF

As one of our over 6 million FreedomWorks members nationwide, I urge you to contact your senators and ask that they vote NO on the Support for the Sovereignty, Integrity, Democracy, and Economic Stability of Ukraine Act, S. 2124. This foreign aid bill for Ukraine contains an unnecessary and expensive new U.S. commitment to the International Monetary Fund (IMF).

Say No to More IMF Funding

President Obama is calling on the U.S. to increase funds for the International Monetary Fund (IMF) due to the current situation in Ukraine. Obama has been pushing Congress to pass the 2010 IMF quota reform package for several years with no success. It’s an expensive package and most House Republicans are no fans of the IMF. Now with the crisis in Ukraine, Obama sees a perfect political opportunity to pressure Congress into voting for more IMF funding.

Key Vote NO on Delaying Reforms to the National Flood Insurance Program (H.R. 3370)

As one of our over 6 million FreedomWorks members nationwide, I urge you to contact your representative and ask him or her to vote NO on the Homeowner Flood Insurance Affordability Act, H.R. 3370. This bill would delay much-needed reforms to the National Flood Insurance Program and inevitably result in a taxpayer bailout of that program.

As one of our over 6 million FreedomWorks members nationwide, I urge you to contact your senators and urge them to vote NO on the Homeowner Flood Insurance Affordability Act, S. 1926. Sponsored by Senator Robert Menendez (D-NJ), this bill would delay much-needed reforms to the National Flood Insurance Program and inevitably result in a taxpayer bailout of that program.