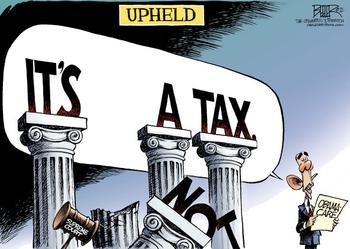 Senate Republicans are now seeking to fix this, by repealing the individual mandate as a part of their tax reform bill, the Tax Cuts and Jobs Act.

However, Democrats seem to have had a change of heart regarding the mandate’s constitutionality. Sens. Al Franken (D-Minn.) and Jeff Merkley (D-Ore.) criticized their Republican counterparts for including the individual mandate in the tax reform bill. They forget that the only premise holding up their flawed healthcare system is the premise that the individual mandate is a tax. So, which is it? Is it a “constitutional” tax or is it an unconstitutional part of a government-run healthcare scheme?

This is not the only flip-flop when it comes to Democrats and the mandate. In 2008, then-presidential candidate Barack Obama had this to say when it came to a healthcare mandate in Massachusetts:

“We’re seeing right now in the state of Massachusetts where people are being fined for not having purchased healthcare but choose to accept the fine because they still can’t afford it even with the subsidies. They are then worse-off. They then have no healthcare and are paying a fine above and beyond that.”

Those words are just as true today as they were back when candidate Obama was trying to sell himself to the American people, and the Congressional Budget Office's constant downward revisions of the number of people who would purchase health insurance coverage on the ObamaCare exchanges bear that out.

There is no reason to continue to punish hard-working Americans for refusing to purchase a product that they may not need or cannot afford. Reforming the tax code will provide vast economic benefits for taxpayers, and repealing the individual mandate will only expand these benefits. This is unequivocally the right move.