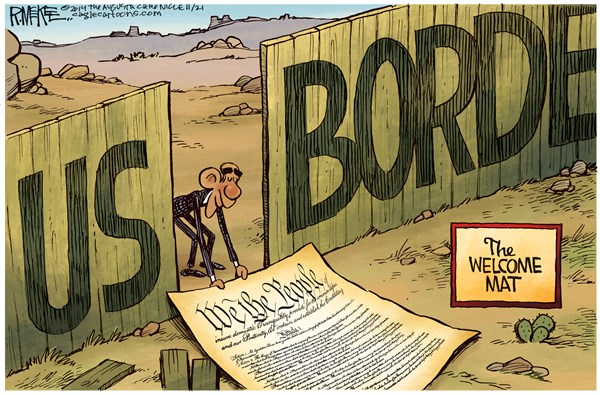 The current plight of millions of illegal immigrants residing in America is a human and emotional tragedy. Recently, a ruling by the 5th District of the Court of Appeals neglected to address the debacle facing America, and the wisdom, or lack of wisdom, of Obama Administration’s executive order also missed the mark on a problem facing Americans. Pursuant to its Constitutional duty, the Court ruled that the Obama Administration did not have the legal authority to Defer(red) Action for Parents of Americans and Lawful Permanent Residents (DAPA).

By executive order, DAPA allows individuals illegally residing in the United States to remain; not only without the threat of deportation but also with the added ability to obtain work authorization.

Explicitly, the Constitution of the United States of America, confers law-making powers with Congress and the President to “take care that the laws are faithfully executed.” The Court is vested with the power to decide whether the executive actions by the Obama Administration exceeded the authority conferred by Congress, the maker of our laws. The trial court and the appellate court reasoned that Congress did not delegate authority for the executive action, and the Department of Homeland Security did not give proper notice and review for the proposed rules. Hence, the Obama Administration violated our Constitution.

Obviously this does not give solace to millions of illegal immigrants. But what about every American? Were we afforded due process? Was our knowledge, opinions and emotions considered and debated by Congress? What impact will DAPA have on our lives? Was America damaged by an unconstitutional proclamation of the Obama Administration?

Claiming to have been injured by the executive proclamation, 26 states sued the United States asserting the administrations’ unilateral overreach was unconstitutional and contrary to congressional intent. To support these 26 states, 88 Members of Congress and 25 Senators wrote an amicus brief suggesting “the President’s unilaterally created deferred action programs for unlawful immigrants are unconstitutional and are contrary to congressional intent.”

As a result, the majority opinion in the 5th Circuit expressed the need for Congress to delegate authority to the Department of Homeland Security.

“We would expect to find an explicit delegation of authority” to implement the DHS rule—“a program that makes 4.3 million otherwise removable aliens eligible for lawful presence, work authorization, and associated benefits—but no such provision exists.”

To outsiders, this process may seem trivial and technical. It is not. The issue is the essence of our Republic; it's our Constitution and Rule of Law. Do we live by the Rule of Law or by a proclamation or arbitrary decision of a government bureaucrat? Our Rule of Law is essential for a free and prosperous society, and America’s dedication to the Rule of Law was essential to the founding of our nation. As Alexander Hamilton explained in Letter No. III to the American Daily Advertiser, Aug. 28, 1794, in The Writings of Alexander Hamilton:

If it be asked, What is the most sacred duty and the greatest source of our security in a Republic? The answer would be: An inviolable respect for the Constitution and Laws — the first growing out of the last. … It is by this, in a still greater degree, that caballers, intriguers, and demagogues are prevented from climbing on the shoulders of faction to the tempting seats of usurpation and tyranny.

A large and well organized Republic can scarcely lose its liberty from any other cause than that of anarchy, to which a contempt of the laws is the high road…

A sacred respect for constitutional law is the vital principle, the sustaining energy of a free government.

Our Constitution limits and divides the power between the Congress, the President and the Courts, which prevents arbitrary decisions by a ruler, government bureaucrat, enforcer or judge. Ultimately, its this process which makes America exceptional. It is the reasons most of our ancestors immigrated to America, and why so many others wish to become Americans.