The (CR)Omnibus Process Has Been Another Congressional Disgrace 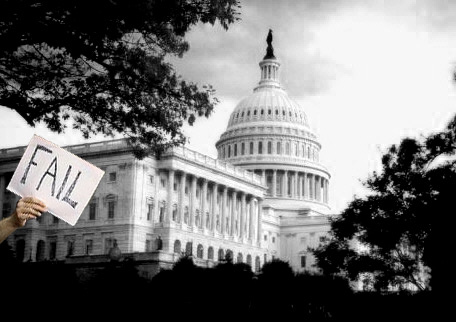 Congress, apparently in a race to more thoroughly deserve its abysmal approval ratings, has conducted a tremendous exercise in bad government this past week. The omnibus funding bill that is set to keep the government paid for through September 2015 has been crafted largely in secret, and once again left lawmakers with only a couple of days to sort through what had been changed in over a thousand pages of text. This is not a rational way to run a government.

Lawmakers have known since early this year that funding the government had to be accomplished by midnight on December 11th. The House, for its part, did pass a majority of the individual appropriations bills that fund each of the major (non-entitlement) segments of the government, while the Senate once again failed to either pass a budget or any funding bills. But the House appropriations were largely a sham in any case because everyone knew that the Continuing Resolution to fund the government ran out in December – after the elections – and thus no real work would get done until a Lame Duck session.

So with bare weeks to go before a funding ran out, a group of lawmakers including the leadership and appropriators of both parties – and very few besides – gathered in a closed room to decide the final form of over a trillion dollars in spending. Instead of an orderly process where new policies are considered via amendments and open votes, both the public and the majority of Congress got to find out what policies are up for a vote only when the entire bill was released. Even in the Republican-controlled House, limited-government conservatives in particular were excluded from most of the conversation, since they might add something controversial to the bill like “the President should follow the law”.

One of the casualties of this opaque establishmentarian process was the massively bi-partisan amendment to Department of Defense appropriations by Reps. Massie/Amash/Holt/Lofgren/etc. to rein in unlimited NSA spying. The amendment passed by an overwhelming 293-123 majority, yet it was stripped from the omnibus bill with no chance for its supporters to protest. A veto-proof majority of Congress, overruled by the powerful few.

So Members of Congress are expected to vote on the whole trillion-dollar package, with little time to find out what is in it, in its entirety, with no chance to amend the bill or to even significantly debate it. Anyone who believes in limited government should be disgusted.

I have started a petition on Change.org to enact a law requiring all future bills not to exceed 500 pages published in the final format (including amendments) before voting on it- please check it out here: https://www.change.org/p/u-s-senate-enact-a-law-requiring-all-future-bil...
If you agree with it - help me spread the word and get enough signatures.
Thank you!

Can we have this article printed in our local newspaper as an editorial? My congressman would really love that since he voted for this insane bill. (I would be sure and note that)

Did you also know they voted themselves a raise? Nice, huh? I never thought I'd say this but I believe it is time for John Boehner to go along with John McCain and I'm not too sure McConnell is really out for our best interests either. Very sad. Very sad indeed. I really like to be kissed before I'm screwed.

I don't know what else to expect with Nancy Boehner in charge of the House.

Boehner to American Voters: DROP DEAD!
The onus is on Conservatives now.
There are no excuses left not to challenge and remove Boehner from the Speakership, and serve warning to every other RINO that their free ride is over.
Gowdy, Jordan, Chavitz...we need fighters in there, not capitulating sellouts!

Right on the money. The American people should flee the Democrat Communist party and the
RINO infested Republic communist party. Both are full of above the law parasite's and their families who are made rich by bribery, extortion, cronyism, nepotism, patronage, graft.

Let's not miss the bigger news here - 212 Democrats voted in FAVOR of GOVERNMENT SHUTDOWN...they voted to defund Obamacare and the Immigration Decree..THAT'S even bigger news that I don't see anywhere...http://www.investingforprosperity.com/government-shutdown.html

On behalf of our activist community, I urge you to contact your senators and ask them to support the CBO Show Your Work Act, S. 1746, introduced by Sen. Mike Lee (R-Utah). The bill would require the Congressional Budget Office to make its models and data available to Congress and the public.

The EPA Is Using Private Emails to Talk to Lobbyists

A recent report from the Daily Caller highlights how the Environmental Protection Agency frequently uses private email accounts to communicate with environmental lobbyists, ducking the transparency and record-keeping requirements that are supposed to bind the agency.