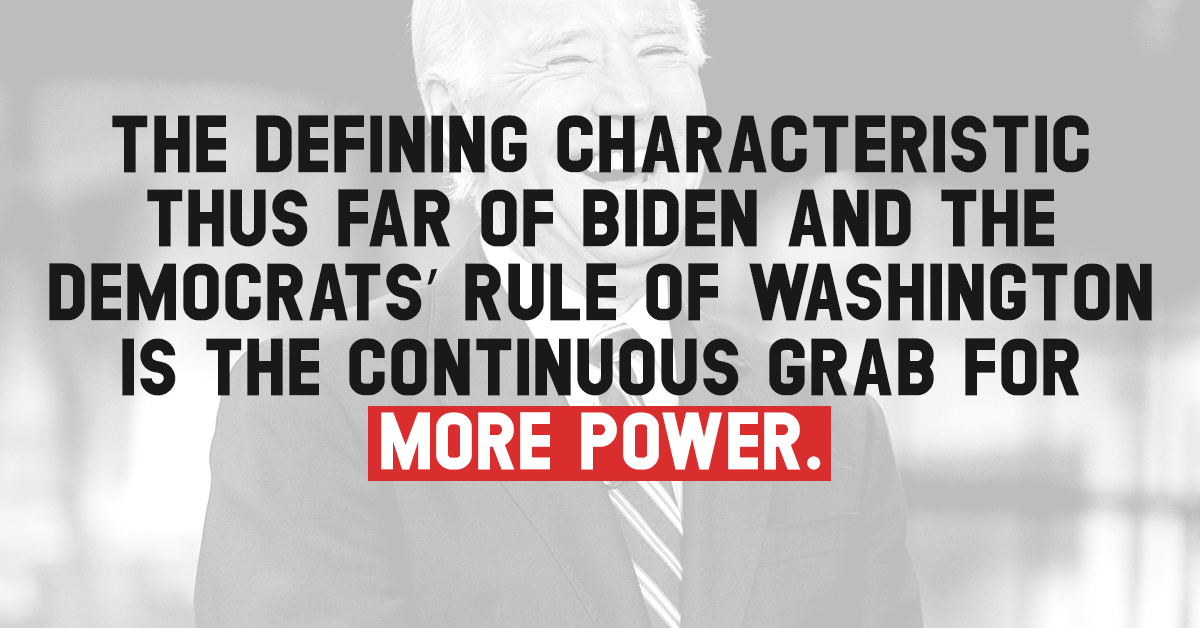 Despite President Biden entering office with the promise of “unity” and “bipartisanship,” the governing Democrat trifecta has been anything but that. The defining characteristic thus far of President Biden and the Democrats’ rule of Washington is the continuous grab for more power.

Democrats are relentlessly pushing to transfer more power to the Washington swamp with legislation to federalize elections and finance their re-election campaigns with taxpayer money. At the same time, Speaker Pelosi uses her authority to erode institutional norms and dictate Republican committee assignments. Perhaps most disturbing is President Biden’s apathy for the Constitution and the rule of law with his extension of the unconstitutional CDC eviction moratorium.

Our Republic deliberately separates power both horizontally and vertically through federalism and the three coequal branches of government. When the federal government attempts to usurp authority from the states or when one branch of government runs roughshod over another, it should give us all cause for deep concern.

It is equally bothersome when an institution such as the House of Representatives is transformed into a partisan cudgel that the Speaker rules over with an iron fist.

All is not well in Washington, and it is the duty of freedom-minded conservatives to raise the alarm.

A Hostile Takeover of our Elections

President Biden’s Disregard for the Rule of Law

The separation of powers in our Republic is essential to the preservation of freedom and individual liberty. When power is abused or co-opted, we must stand firm and defend the institutions of the United States.

In the House of Representatives, we must open up the legislative process and restore a voice for the minority party. Speaker Pelosi is doing her best to sideline conservatives by denying them committee assignments and ostracizing them from the process.

We must protect the institutions of our republic from Washington swamp politicians interested in growing their power at the expense of our constitutional system of government. This includes protecting the Senate filibuster.

There is a concerted effort among left-wing activists to dismantle the remaining institutions that block their radical agenda. There are scores of vocal Democrats advocating for the abolition of the filibuster, a sixty-vote threshold to end debate in the Senate. Without the filibuster, “The Corrupt Politicians Act” would be law, and narrow majorities could dramatically transform our country’s institutions.

If the filibuster is abolished, at stake would be election integrity, the First Amendment, the makeup of the Senate, and the structure of the Supreme Court. The same politicians who have shown nothing but a desire for more power have only the filibuster between them and the fundamental reshaping of power in our government.

Conservatives must reject left-wing attempts to grossly expand the federal government, shut down the legislative process, abandon the rule of law, and erode our institutions. This means protecting the Senate filibuster and calling out the abuses of power that happen far too often in Washington.

FreedomWorks Statement in Response to the Senate Judiciary Committee’s Hearing on the John R. Lewis Voting Rights Advancement Act of 2021