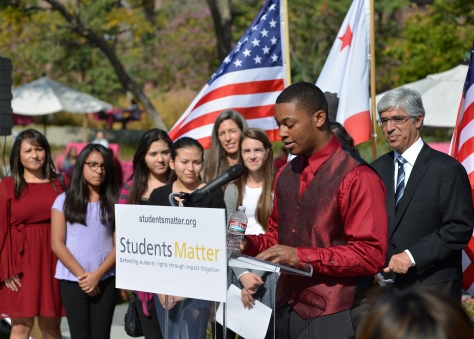 With the support of Students Matter, a student advocacy organization, nine students filed suit against the state of California in Vergara v California, arguing that employment protection clauses in the California Education Code that prevent bad teachers from being terminated threaten every student’s right to a quality education. Los Angeles Superior Court Judge Rolf Treu agreed in a tentative ruling with the students, stating “Substantial evidence presented makes it clear to this court that the challenged statutes disproportionately affect poor and/or minority students.” In the words of the judge, the evidence was not only clear, but “shocks the conscience.”

The judge’s decision overturned five statutes. The first was the Permanent Employment statute, or tenure. This provision forces school administrators to grant or deny teachers permanent employment, typically after only a few years on the job. For California, teachers only have to work for 18 months before being granted tenure. When five school districts in California were surveyed to see how many new teachers were granted tenure, 99 percent made the cut, raising serious questions about the review process. However, when fellow teachers were asked, 68 percent reported that many of their fellow tenured educators were unfit to teach.

The second statute that was struck down was the Last-In-First –Out (LIFO) provision. During times of tight budgets when schools are forced to lay off teachers, school districts are forced to give priority to teachers that have served the longest in their positions rather than those that have served the most effectively as educators. A study by the New Teacher Project found that only 13 percent to 16 percent of teachers that are let go in the current seniority system would also be let go if teacher quality was a consideration. The LIFO statute is particularly harmful to low-income and minority communities that have greater numbers of younger teachers and would face a greater chance of losing teachers to budget cuts.

The final three provisions are Dismissal statutes that are designed to make it nearly impossible to fire even the most incompetent and deplorable teachers. In order to fire a teacher, a school board must follow an array of legal steps that take years and hundreds of thousands of dollars to complete. Between 2000 and 2010, the Los Angeles School District spent $3.5 million to discharge only seven teachers, of which only four were successfully fired. When the cost of firing a single teacher is $500,000, is it any wonder that the state of California only terminated 91 teachers over the past ten years? For low-income communities with limited funds available for their schools, administrators often have to choose between investing in a complex legal process to dismiss poorly performing teachers and providing the needed resources for their students.

The defendants, the California Teachers Association and the California Federation of Teachers, said they intend to appeal judge Treu’s ruling. “We believe the judge fell victim to the anti-union, anti-teacher rhetoric and one of American’s finest corporate law firms that set out to scapegoat teachers for the real problems that exist in public education. There are real problems in our schools, but this decision in no way helps us move the ball forward,” said Joshua Pechthalt, the president of the California Federation of Teachers.

Contrary to the defendant’s claims, research from Harvard University has found that replacing a less competent teacher with even just an average teacher can raise a student’s lifetime earnings by $250,000 per class. The removal of these burdensome statutes will streamline the dismissal process and allow school districts to better allocate teachers that can best address the academic needs of their students.

Vergara V California will likely set a precedent for students and parents in other states looking to ease dismissal rules for ineffective teachers. California is just one of 14 states that make seniority the sole consideration for termination. Teacher performance, however, is the primary factor in teacher firings in only three states and the District of Columbia. We expect accountability from those that deliver every service we consume, from the food we eat to the cars we drive. It’s about time that this same accountability is brought to bear on those we entrust to educate our children.

As a public school teacher I welcome weeding out low performing teachers. I also support weeding out low performing principals, resource teachers and coaches. The public also needs to be concerned with the low quality of many district administrators. The Peter principle is alive and strong.
Teacher evaluations need to be designed to give meaningful feedback so teachers can improve. Evaluators need to be impartial, unbiased and knowledgeable instructors themselves. This is not always the case.
While poor teachers need to find new employment the evaluation process needs to protect good teachers from unethical, irrational or vindictive evaluators. A sound system of checks and balances needs to be developed or progress will not be achieved.