On Debt, the Ceiling Is Less Important Than What's Underneath 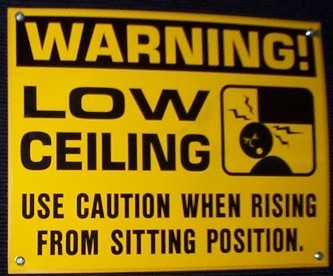 It's actually not that low.

The ever-shifting horizon on when the federal government is scheduled to reach its borrowing limit has most recently been set at November 3rd, just days after John Boehner is scheduled to resign his office. What this means is that no new leadership will save us from yet another increase in the debt ceiling, although there will always be a principled few who will want to resist.

The problem with the debt ceiling fight is that by the time we get around to having it, it’s already too late. A popular talking point runs: “we’re just paying bills for things we’ve already bought.” As inane as it is, there’s some truth there. Congress operates by committing to spending increases that we don’t have enough money to pay for, trusting that by the time the bills come due, the threat of default will drive almost everyone to unthinkingly vote to lift the debt ceiling and borrow the money we need.

Instead of talking about how high the debt ceiling should be, what we should really be focused on is living within our means so we don’t have to keep having this conversation. That’s why the spending caps resulting from the 2011 Budget Control Act are so important. They are the only real restraints on spending we’ve seen in the last five years, and they only came after an extremely long and contentious battle. To surrender them now would be extremely irresponsible given the way we continue to rack up debt.

Yet, irresponsibility seems to be the order of the day. Republicans want to spend more on the military, and the only way that’s going to happen is by letting the Democrats spend more on everything else. Bye-bye budget caps.

Lurching drunkenly from one crisis to the next is not governing, and we should never mistake gun-to-head ultimatums at the 11th hour for real negotiations. People’s instincts for freedom and responsibility tend to go out the window when they get scared, so in these situations, those advocating limited government and fiscal restraint are destined to lose. This is one of the major complaints of the House Freedom Caucus in their desire for new leadership, and why a return to regular order is critical.

Whether or not to raise the debt ceiling is an important debate to have, and we shouldn’t give up just because it’s hard. But more pressing is the need to stop hitting the ceiling in the first place. A balanced budget is still a long way away, but at the very least Congress should maintain the spending caps in whatever budget deal they negotiate this December.