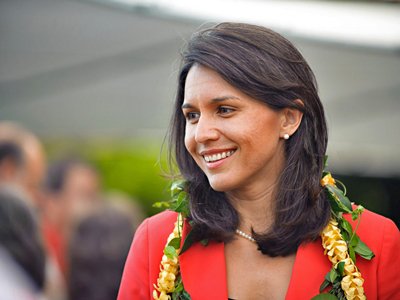 “Every soldier knows this simple fact: If you don’t know your enemy, you will not be able to defeat him,” Rep. Gabbard was quoted by Fox News. “Our leaders must clearly identify the enemy as Islamist extremists, understand the ideology that is motivating them and attracting new recruits, and focus on defeating that enemy both militarily and ideologically.”

Her statement was true, clearly stated and critical to our national interest and defense. However, it was also political blasphemy. It violated her fidelity to the Democrat leadership, especially to our President.

Immediately, the Democrat attack machine responded. “I take serious issue when somebody who’s done a little non-fighting in Iraq, and is not a Middle East or Islamic scholar, claims to know better than our President and Secretary of State how to fathom the motivations of terrorists, or how to refer to them beyond the term that best describes them — terrorists,” said Bob Jones of the Oahu-based Midweek.

Michael Perry of Hawaii’s KSSK radio worried about the political pay back for her “mortal sin.” “While Gabbard is correct in her ‘emperor has no clothes’ moment, she may have lost her future seat on Hawaii’s political bench.”

In the past, the “party leaders” have harshly penalized apostate party members. Speakers Pelosi (D-CA) and Boehner (R-OH) have removed members from select committees and withheld campaign contributions.

These “party leadership” machinations indicate the control and power of our political elites – Democrats and Republicans - and harms America's future.