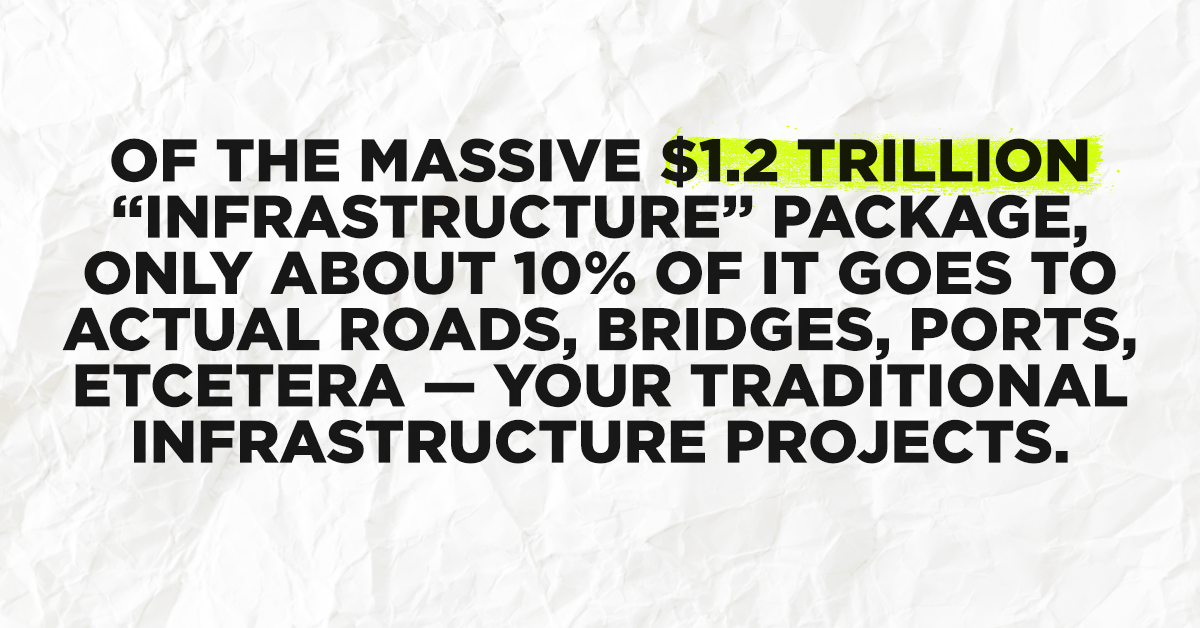 Congressional Democrats should not be spiking the football after passing Biden’s $1.2 trillion infrastructure package in their attempt to steal the spotlight back from Democratic New York Gov. Andrew Cuomo’s resignation.

Senate passage of the Infrastructure Investment and Jobs Act is barely the first step of many before Congress gets to send the bill down Pennsylvania Avenue. After all, the new power-broker in the Senate, Democratic Arizona Sen. Kyrsten Sinema, will have a final say on whether Americans will be liable for trillions of dollars more in pork barrel spending.

On Tuesday, Republican Texas Sen. Ted Cruz quoted Otto von Bismarck’s epigram: “Laws are like sausages, it is better not to see them being made.” This is a very fitting message for the legislative mockery currently happening in the Senate.

Of the massive $1.2 trillion “infrastructure” package, only about 10% of it goes to actual roads, bridges, ports, etcetera — your traditional infrastructure projects. Interestingly, 19 Republican senators, most who promised to be fiscally responsible legislators, joined Democrats to bring this bill over the finish line.

Now that the Senate has passed the Infrastructure Investment and Jobs Act, the difficult part begins for House Democrats.

In the past few weeks, House Speaker Nancy Pelosi has pledged not to consider the infrastructure package on the House floor until the Senate passes another massive $4 trillion spending bill through a process known as budget reconciliation. This process is not subject to the Senate’s 60-vote rule to end debate and only requires a simple majority to pass the budget resolution and reconciliation bill.

However, Sinema has said she will not support a $4 trillion budget reconciliation bill, while Democrat Sens. John Tester , Mark Kelly, Joe Manchin and others continue to hide their true feelings about this fiscally irresponsible budget proposal.

We need Sinema not only to stick to her common-sense instincts and oppose this multi-trillion dollar piece of legislation, but for her to encourage her colleagues to do the same. In fact, “common sense” may be what tanks the $1.2 trillion infrastructure bill, as well as the $4 trillion budget reconciliation bill.

Recall that the original $3.5 trillion mark for the budget deal was struck between Congressional Democrats and the Biden White House. Senate Budget Committee Chairman Bernie Sanders was originally pushing for a $6 trillion reconciliation bill before settling. To Sanders’ wing of the Democrat coalition, this multi-trillion dollar bill is already a compromise. Anything short of $3.5 trillion in the final package would be a violation of the agreement and will cause a revolt among progressives.

But Speaker Pelosi can only afford to lose no more than 3 votes to pass anything in the Democrat-controlled House. Her caucus is everything but united on what this budget reconciliation infrastructure package will look like.

Here’s where things get tough for Pelosi. Democratic Illinois Rep. Chuy Garcia has said he will not support a reconciliation bill that does not provide a pathway to citizenship for undocumented immigrants. Democratic New York Rep. Mondaire Jones tweeted that “without a reconciliation package that meets this moment, I’m a no on this bipartisan deal,” whatever the means. Finally, Democratic New York Rep. Alexandria Ocasio-Cortez has threatened to block the $1.2 trillion infrastructure package if the Senate does not pass the $4 trillion legislation.

But what about moderate Democrats? Democratic New Jersey Rep. Josh Gotheimer and other Democrats recently wrote a letter to Pelosi urging her to bring up the $1.2 trillion as soon as possible. This is a sign that they see the legislative logjam happening, including the potential of both bills eventually becoming too big to pass.

The $1.2 trillion Infrastructure Investment and Jobs bill is anything but settled. There are many moving pieces that are standing between Americans spending more than $5 trillion on Green New Deal policies and social welfare programs or reconsidering the actual infrastructure needs (roads, bridges, ports, etc.) of our country.

With Republicans now being out of the spending fight, thanks to their willingness to give Democrats a chance at bankrupting our country, our hope for fiscal sanity rests with Senator Sinema and her ability to instill common sense into the Senate.

Cesar Ybarra is the Senior Director of Legislative Affairs at FreedomWorks.