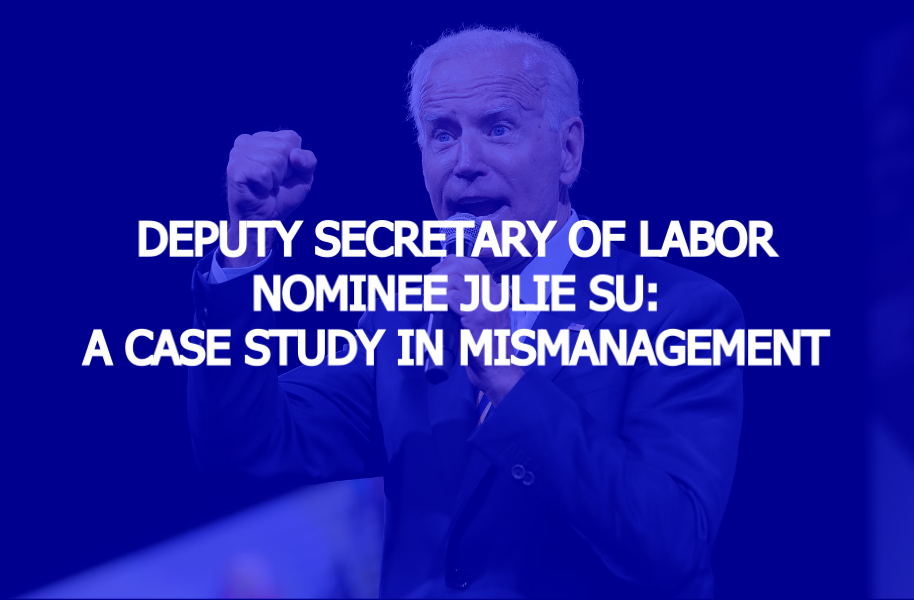 With thousands fleeing from California to escape the massive tax hikes, radical left policies, and rampant homelessness, Julie Su has exacerbated the ongoing unemployment crisis in the so-called “Golden” state. California’s unemployment rate now stands at 7.9%, the third-highest in the country. During her time as secretary of California’s Labor and Workforce Development Agency, she implemented the radically anti-worker state law known as AB 5, as well as the Private Attorneys General Act. If confirmed as Deputy Labor Secretary, Julie Su would bring her radical California policies to the entire country, further hindering economic recovery.

The nomination of Julie Su as Deputy Labor Secretary represents a rebuke of the feigned campaign promises of “moderateness” from the Biden administration and instead embraces the radical Democratic agenda found only in the “great” State of California.

A strength of the U.S. system of government is the complex and balanced relationship between state governments and the federal government known as federalism. If a failing state such as California wants to enact radical policy and finds itself subject to rampant fraud and mismanagement under the leadership of individuals such as Julie Su, the detriment to the state does not impact the rest of the country. However, if Su is confirmed as Deputy Secretary of Labor--a position charged with managing the massive U.S. Department of Labor--no one should be surprised when her lack of management ability harms the entire country.