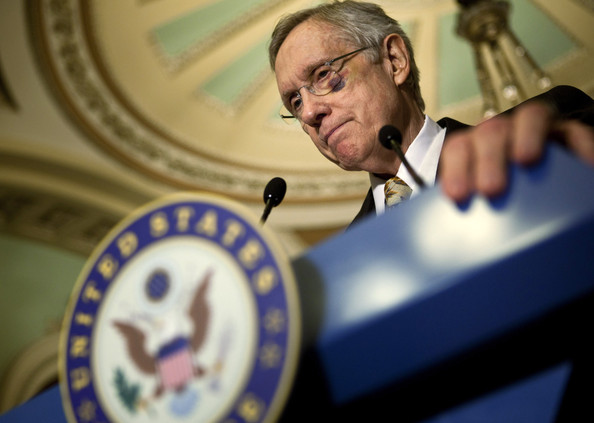 Harry Reid rules the Senate with an iron fist.

This represents a change in the way many Americans regard government, different from its original intent. There is a tendency to think of the Senate as a body designed to pass laws. If it is not passing laws, it is not doing its job. But this is not how the founders thought of it. They intentionally made it difficult for laws to make it through the Senate. They wanted a broad consensus before laws could be passed, not a simple majority. They recognized the danger of a lawmaking body that was too swift, too efficient and too discretionary.

For those who buy into the idea that majority rules is a fair practice, it’s worth considering the other ways in which Reid’s style of leadership has impacted the Senate. One of the practices that has become standard under Majority Leader Reid is the filling up of amendment trees for bills before they reach the floor, denying opponents the opportunity to alter bills in an effort to achieve some sort of consensus. This means that Republican Senators effectively have no ability either to debate or to amend legislation, restricting their role to an up or down vote on whatever Reid decides to bring before them. This is not “majority rules,” it is rule by one man.

Of course, Reid’s takeover of the Senate was not accomplished alone; he had plenty of help from his establishment friends—both Democrats and Republicans. Senators Mark Begich, Thad Cochran, Kay Hagan, Mitch McConnell, Mark Pryor and Mark Udall all voted to approve the measure, selling out the rights of the minority party.

Senators are supposed to represent the voters in their home states. If they do a poor job of this, their constituents have the option to vote them out at the next election cycle and replace them with someone better. What recourse do voters have, though, when their Senator is not even permitted to participate in the legislative process apart from giving a thumbs up or thumbs down to the Majority Leader’s preferred bills? Reid’s actions have effectively disenfranchised voters from having their voices heard in the Senate chambers.

But what about the upcoming midterm elections? Isn’t Reid in danger of shooting his own party in the foot, if the Republicans take back the Senate? Not really. Reid and the Democrats don’t have to worry so much about 2014, because even if he loses his status as the Majority Leader, there will still be a Democratic president in the White House who can veto anything the Republicans try to push through using the expanded powers Reid has granted himself. In any case, he can always reverse the nuclear option once the election results become apparent.

Over the years, the Senate rules have been circumvented in order to “streamline” the process. Cloture and confirmation votes once required a two-thirds majority, but this was lowered to sixty votes for the same reasons that Reid now wants to see simple majority rule. But streamlining is not what lawmaking is about. The Senate is working when there is robust debate, when impassioned speakers make their cases for what they believe is right, not when one party, and certainly not one man, simply rams their agenda down the throats of the rest without debate, without amendments and without recourse.

Reid has demonstrated that he’s willing to do whatever it takes to get his way, even if it means disrespecting longstanding Senate traditions and exploiting obscure loopholes to shut down his opposition. His actions have condensed what should be a body of a hundred voices down to a single, dictatorial megaphone.