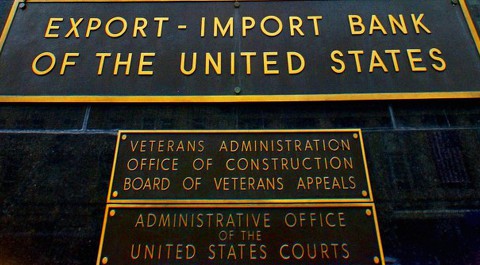 It's gone where the goblins go, below.

It seems like the liberty movement has taken a bit of a beating lately, with the Supreme Court defending ObamaCare subsidies, the FCC expanding its regulation of the internet, and budgets continuing to spend beyond our means and rack up more national debt. But it’s not all bad news, and at times like this it’s more important than ever to celebrate victories where we can find them. The end of the United States Export-Import Bank is one such victory.

At midnight tonight, the Bank’s charter will expire for the first time since its creation 80 years ago. This means it won’t be issuing taxpayer-backed loans to big companies with political clout. It won’t be granting special favors to green energy companies to satisfy the president’s personal preferences. It won’t be handing out your money to foreign and corrupt corporations. The expiration of Ex-Im is a blow against the cronyism and corporate favoritism that gives “pro-business” Republicans a bad name, and that’s something we should celebrate.

Sure, the Bank is a relatively small example of a larger, systemic problem with the relationship between government and business. With an estimated cost of $2 billion over ten years, there are certainly bigger fish to fry in the war against cronyism. It’s also true that Congress will very likely reauthorize the Ex-Im Bank sooner or later. But we should underestimate the impact of finally putting the brakes on a program that has overstayed its welcome by nearly a century.

Stopping the Ex-Im Bank was only possible because ordinary people stood up and refused to take it anymore. The lobbying pressures, not only from the direct beneficiaries of the Bank like Boeing and General Electric, but also from big-money powerhouses like the U.S. Chamber of Commerce, was enormous. Overcoming that kind of inertia is no mean feat, and anyone who took the time to call or email their congressman should be proud of the role they played in helping David defeat Goliath.

The Ex-Im Bank will expire, and the world will not end. Boeing’s planes will not fall from the sky, and General Electric will not close its doors. We are teaching the world a lesson that government handouts are not the way to prosperity, and that cutting useless programs will not mean an end to our way of life. In a time when the policies of reckless government spending and economic intervention have plunged Greece into financial chaos, it’s a lesson the world very much needs.

Yes, the Bank will probably be reauthorized, but the next time we have this fight, our position will be all the stronger. We’ve removed a critical arrow from the quiver of the crony capitalists: No longer will they be able to claim that the Export-Import Bank is the only thing keeping the small business economy alive. That claim will have been exposed for the lie it is, and next time, ending the Bank for good will be that much easier.

So take a minute to forget about the heresies of the Supreme Court and enjoy this small victory. You’ve earned it.

O the behalf of the perfect demo for the website and most popular game scrabble word finder words which specially made https://scrabblewordfinder.me for the person or game lover who want the fun and wisdom twist and this type of the combination really make very rich chance for the every person.

It is about time that this corrupt, corporate welfare machine was shut down. GE and Boeing have gotten a majority of the money and if it wasn't going to them it went to useless Obama Green Energy buddies or corrupt foreign companies that use it to steal s from the American Workers. Good Riddence!