As we’ve come to expect, yet another lackluster jobs report has been released. The highly anticipated Labor Department Jobs Report shows that only 151,000 jobs were added October. This slight increase in jobs was not enough to lower the official unemployment rate. For the third month in a row, the unemployment rate has been unchanged at 9.6 percent. Yet, this not even factor in the 1.2 million Americans who have altogether given up searching for a job. Additionally, roughly 18 percent of part-time workers are underemployed meaning they want full-time employment. The Labor Department chart below shows the painfully slow economic “recovery”: 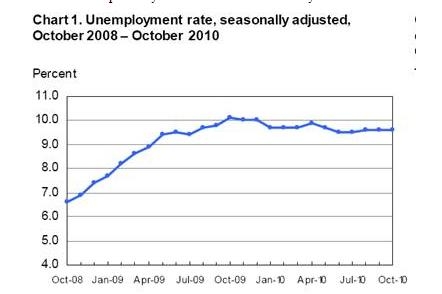 Last week, the American people’s voices were heard at the ballot box. Many lawmakers who voted for big government schemes such as the $814 “stimulus” were booted out of office. This should come as no surprise. Back in February 2009, the Obama administration promised that the massive spending package would keep the unemployment rate below 8 percent. In late 2009, the unemployment rate reached double digits with the “stimulus” enacted and has hovered around 10 percent ever since.

Congress cannot create new purchasing power out of thin air. Every dime that was supposedly injected into the economy was first taken from taxpayers or borrowed out of the economy. Therefore, “stimulus” plans merely redistribute money and cannot create long-term economic growth. Obama’s misguided policies likely made the recession much worse by taking billions of dollars away from the productive private sector. In fact, a Truth in Jobs study found that 10 million jobs were not created in the private sector largely due to flawed “stimulus” plans.

The new jobs report also shows that the number of long term jobless—those jobless for 27 weeks or over—is unchanged at 6.2 million. On November 2nd, the unemployment extension that President Obama signed back in July will expire. Indiana unemployment offices are even hiring armed security out of concern how people might act when they have exhausted their unemployment benefits.

Currently, unemployed American workers can generally collect unemployment benefits for up to 99 weeks—about 2 years. On Wednesday, President Obama called on Congress to extend unemployment insurance during the upcoming lame duck session. He stated:

I think it makes sense for us to extend unemployment insurance because there are still a lot of folks out there hurting.

A CNN article predicts that an unemployment benefits extension will be one of Congress’ main objections once they return on November 15th. How much further does Obama wish to extend unemployment insurance? At what point is enough, enough?

It is true that many Americans are struggling to make ends meet. Polls show that the majority of Americans still feel the severe impact of the prolonged Great Recession. But we must account for the unintended consequences associated with excessive unemployment insurance. According to the Wall Street Journal,

Some workers agree that unemployment benefits make them less likely to take whatever job comes along, particularly when those jobs don't pay much. Michael Hatchell, a 52-year-old mechanic in Lumberton, N.C., says he turned down more than a dozen offers during the 59 weeks he was unemployed, because they didn't pay more than he was collecting in benefits.

Naturally, humans respond to incentives. As a result of excessive unemployment benefits, people may not be as proactive about searching for jobs or may become pickier on which they jobs they accept. The WSJ article says that despite high unemployment some firms “are getting an underwhelming response, and many are having trouble filling open positions.”

Most people are searching to find a job that pays comparable to their previous job. A study from CareerBuilder’s consulting firm Personified finds that 92 percent of unemployed people who are offered a job reject the opportunity mostly because the salary was too low. They may be able to get a job but not the most desirable job.

Ultimately, excessive unemployment benefits create a sense of dependency on the government. We should instead promote self-sufficiency and independence by encouraging work. Simultaneously, Congress should promote job growth by stopping the 2011 tax hikes that will likely force more Americans to rely on unemployment benefits for their source of income. These steps are crucial to reduce the high 9.6 unemployment rate that we still face.

A Targeted Response to COVID-19 Is Necessary

Earlier this week, the Department of the Treasury released its requests to Congress for the third-phase of COVID-19 response legislation. This request includes $500 billion in direct payments to Americans, $300 billion in loans to small businesses, $150 billion to distressed industries, and $50 billion to the airline industry. Add it all up, and we’re looking at a $1 trillion package to address COVID-19, in addition to the roughly $110 billion that Congress has already spent in response to the pandemic.