Is Ed Markey Suffering From a Form of Gore Superiority Complex?

The American Heritage Medical Dictionary defines 'superiority complex' as an exaggerated feeling of being superior to others.  McGraw-Hill defines it as any number of behaviors, including self-aggrandization.  What better defines feelings of superiority and self-aggrandizement than the claim of former vice-President Al Gore, who once famously proclaimed to have taken the "initiative in creating the internet".

Perhaps the Democratic U.S. Senate hopeful from Massachusetts, Ed Markey, is trying to channel Gore's self-aggrandizing approach, taking some level of credit for every technology-based invention under the sun - from satellite dishes, to Skype, to Facebook, and even Google.

In a newly released ad, Markey, who is running against Republican Gabriel Gomez to replace John Kerry in the U.S. Senate, takes legislative credit for having brought the world these technological advances.

The ad opens by running through a series of visual presentations of these advances, with Markey himself saying the following:

It's hard to believe, but 20 years ago almost no one had broadband. Smartphones hadn't been invented yet.  Facebook, Skype, Google?  The stuff of science fiction.

And that, according to Communispace CEO, Diane Hessan, is when Ed Markey stepped in, and made all of these things possible.  (Hessan, it should be noted, is a heavy Democratic donor).

This isn't the first time Markey has laid claim to the innovations of others.

In a February interview with The Republican, Markey argues that his work led to the 'creation of the 18-inch satellite dish', multiple cell phone licenses, a switch from analog to digital technology, and gave cable companies the ability to provide phone and data service.

And in a Senate primary debate in March, Markey mentioned that his legislative efforts in the '90s led to the 'unleashing' of Google, eBay, Amazon, Hulu, YouTube, Facebook and Twitter.

The crux of Markey's argument lies with the 1996 Telecommunications Act, a well overdue overhaul of the Communications Act of 1934.  To harken back to this Act is a bit of a reach in and of itself, but opens the door to criticism in that 17 years later, a new overhaul is sorely needed.

In an op-ed for CNET in 2006, FreedomWorks President Matt Kibbe discusses the legislation's obsolescence.

The Telecom Act suffered from the fatal hubris that afflicts most government regulations: It falsely assumed it could anticipate and react to the evolution of technology.

Kibbe also points out that one of Markey's arguments regarding the ability of cable companies to provide phone and data services, actually hurts competition because of the Telecommunications Act.

Anyone who has shopped for this service knows the two main options are DSL from a phone company or cable from a cable company. They offer the same service, but they're treated differently by the law. The Telecom Act pigeonholes cable, telephone and other communication services into their own "silos."  Each silo is regulated and taxed by different rules and bureaucracies.

He adds that, "when competitors in the same market receive differential treatment from the government, consumers suffer."

His work on the bill triggered criticism during Markey’s Democratic primary with US Representative Stephen F. Lynch, who pointed out that broadband is still limited in parts of Massachusetts and mocked Markey’s claims of targeting monopolies. Lynch said that the market for services had instead forced scant options on consumers.

According to Markey however, consumers certainly aren't suffering with the technological advances he has pioneered for them.

Remember this next time you update your status on Facebook.  Or during your next Google search.  Or even the next time you inadvertently run an ad in which you crop an opponents face right next to that of Osama bin Laden on YouTube. 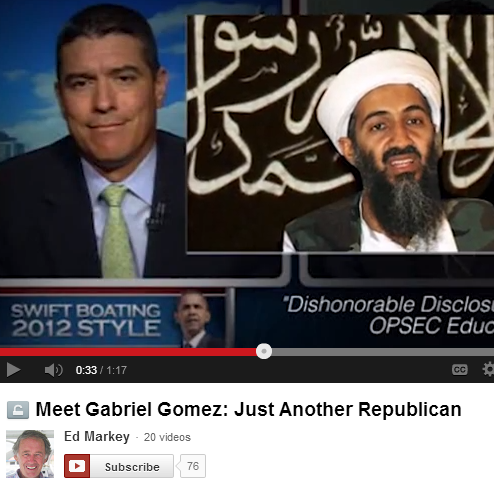 Remember - you owe it all to Ed Markey.

Senate Democrat Says the National Debt Is Not a Threat

Sen. Ed Markey (D-Mass.) does not believe the United States' $19.2 trillion national debt is a national security threat. He made the comments during a Senate Foreign Relations Committee hearing on the strategic implications of the national debt on Wednesday, chaired by Sen. Bob Corker (R-Tenn.)

The Naming of Leftist Catastrophes

This week, a global warming climate change alarmist group decided it would be great fun to petition the World Meteorological Organization to start naming violent storms after prominent deniers of their theory, despite a complete lack of evidence that violent storms are any more numerous today than in other years: "[W]e propose a new naming system, one that names extreme storms caused by climate change, after the po

Democracy and Power 106: A Politician Receives No Financial Gain for Good Policy or Punishment for Bad Policy It is hard to imagine a more stupid or more dangerous way of making decisions than by putting those decisions in the hands of people who pay no price for being wrong. – Thomas Sowell

Two days ago the LA Times reported that Al Gore has picked up a pricey new Italian-style villa with "ocean view, fountains, six fireplaces, five bedrooms and nine bathrooms" all for a mere $8,875,000.