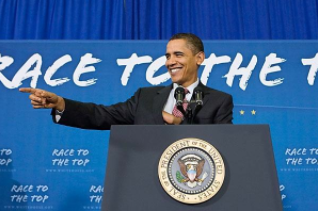 In the last Presidential debate, slated to be a foreign policy debate, President Obama made numerous attempts to shift the focus to education. Yet, his record on education hasn't improved the situation, and the policies he has quietly put in place only add more to the debt the nation's children will have to pay.

The controversial No Child Left Behind education law has been completely gutted under President Obama, with 26 states currently relieved of the duty to make all students proficient in reading and mathematics by 2014. Sidestepping Congress, the Department of Education gave the states waivers in exchange for their agreement to meet new goals which make them eligible for the administration's Race to the Top grants. While No Child Left Behind focused on consequences for schools that failed to meet standards, Race to the Top instead rewards schools for achievement and is aimed at only the bottom 15% of schools.

The cost for the President's new program will be $4.35 billion, which is only a small portion of the $69.8 billion he has proposed for discretionary spending for the Department of Education. Overall, the President's education budget would be a 40% increase from 2008. Despite the President's insistence that increasing spending is the answer to the country's education woes, research has shown performance-based pay does not work. Programs in New York City and California have previously been deemed unsuccessful and pay for performance has been noted as being "more useful politically than it is effective educationally." In the cases of Virginia, Florida and Washington D.C., the President's new grants have even led to race-based goals in order to qualify. While Virginia went back to the drawing board and now have all students with equal proficiency goals, Florida and D.C. were rewarded with money from the Race to the Top program.

As for alternative programs to improve the nation's education, President Obama seems to prefer his grants alone. In their previous debate, that actually had education on the agenda, Governor Mitt Romney brought up his support for school choice. While school choice programs have been extremely successful around the country, the President continues to fight against them. In D.C., he tried to eliminate charter schools completely and only funded the district's scholarship program (that provides students with vouchers) after a bipartisan effort begging him to approve the funding. Even many Democrats have come around to the idea of school choice, seeing it as a civil rights issue. "If rich white kids can go to the school that best fits them, why can't we provide the same opportunity to poor minority kids?"

Ultimately the President is desperately trying to pander to teachers and teacher's unions for votes. His policies don't reflect a President who is serious about changing education in the United States. Should President Obama win re-election, America's public education will continue to disappoint and fail to unlock the potential that resides in the next generation to inherit our country.

Tags School Choice, race to the top, No Child Left Behind, 2012 presidential election
Log in or register to post comments.
1 comments
Merry Beans
11/14/2012

I'm glad they gutted NCLB. It was a horrible idea anyway. I'm a public school teacher in a low-income neighborhood and it's impossible to meet the standards set out by NCLB when you are faced with the situation we are faced with. We have only the lowest-performing students at our school, because "school choice" lets the better kids leave and go to charter schools. We have no funding for the materials needed to properly educate the children because the property values in our area are so low, and we get funding partially from the local property taxes. The children are not encouraged to learn at home because their parents are all on welfare and have no motivation themselves, and don't know elementary math, so can't help them with their homework. Everything about the situation is pointing to failure. So what do we do? We take funding away from the kids who need it the most. These kids have everything going against them. They need money for afterschool programs, teachers aids, smaller class sizes, arts programs, computers, etc. to give them the kind of education that removes them from the cycle of poverty. What they DON'T need is to be punished for being in a bad situation. The school is underperforming because it is being set up to fail. Give the kids some help and encouragement and they might have a chance at succeeding. Punish them because they missed AYP by 1 point and you're just feeding the cycle.

Profiles in Education: The Kruta Family

This school year, Virginia Kruta made the leap from private schooling to homeschooling her four children. Virginia attended public school through sixth grade, then moved to a Christian prep school until graduation. Her husband Jim attended private Christian school through eighth grade, then attended the same Christian prep school. So, with experience in both public and private schools, what made this family to decide that homeschooling was the right fit for their family?

Fate of Tennessee School Vouchers to be Decided

The fate of school vouchers in Tennessee will be decided tomorrow, and there is an usual fight brewing. The problem doesn’t seem to be whether or not to offer vouchers, but how many and to whom. Arguments over these details could lead to vouchers being scrapped altogether.

On today's edition of The FreedomCast, Director of Grassroots for FreedomWorks, Whitney Neal joins me to discuss several school choice bills currently making their way through the Texas legislature and why school choice is the civil rights issue of our times.   You can support FreedomWorks' efforts in Texas and on behalf of children everywhere who deserve school choice.

Profiles in Education: The Thompsons

Meet the Thompsons, a homeschooling family from Texas. Mr. and Mrs. Thompson both attended traditional public schools, but decided they wanted something different for their own four children. So, how did this family decide that homeschooling was best for them, and what happened next?

The Battle Against Common Core Standards

Quietly and almost without notice, an initiative which significantly erodes local and state control of school curriculum has passed in 46 states. The Common Core Standards Initiative sets Math and English curriculum in every participating state at the same level. In adopting this “common core” states are relinquishing their right to compose their own education requirements.

Kids are weird — especially mine. Sure, I can identify personality traits as coming from me and my wife, but they’re jumbled up in odd ways. If we’re the original track, our kids are the dance remixes. My eldest daughter is analytical and conscientious when work needs to be done, but fearless and funny in her off time. Her younger sister will procrastinate and goof off, but will create elaborate, amazing projects just for fun. Definitely related, but wildly different.

Today, the Indiana Supreme Court made an important decision for families in that state by unanimously upholding their school voucher law. “Finding that the challengers have not satisfied the high burden required to invalidate a statute on constitutional grounds, we affirm the trial court’s judgment upholding the constitutionality of the statutory voucher program,” the court wrote.

0
03/26/2013
School Choice in Tennessee is good for everyone
"https:\/\/www.freedomworks.org\/content\/school-choice-tennessee-good-everyone?social=facebook_share"
null
https://fw-d7-freedomworks-org.s3.amazonaws.com/styles/thumbnail/s3/te_social_media_share/fw_default_0.jpg?itok=35IWEBMb
Blog

School Choice in Tennessee is good for everyone

While Tennessee currently allows students to switch from one public school to another, both in-and-out of district, their overall options are very limited. With the currently proposed legislation, SB196/HB190, legislators aim to create much greater educational opportunities that improve the lives of all children; especially low-income families. Children don’t deserve to fall victim to bureaucracies that standardize school programs when their individual needs are at stake.

Education Needs a Shot of the Free Market

It might seem strange to suggest that the American educational system look to bourbon, but maybe that is just what they need. Maker’s Mark had a little lesson in free market economics this week, and schools should take note.