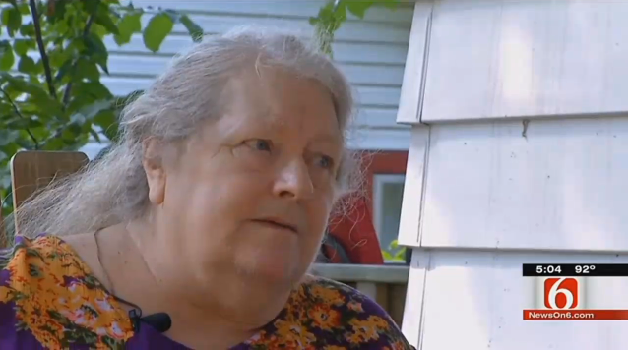 Linda Goss and her husband, Donald, were falsely accused of drug offenses and their property was seized in a botched raid

In March 2012, Linda Goss was in her residence at 238 Navajo Place in Mannford, Oklahoma, a small town located about 25 miles west of Tulsa, waiting for her husband, Donald, to return from a fishing trip, when deputies from the Creek County Sheriff's Department raided their home. Deputies were executing a search obtained by Deputy Scott Forrester. The only problem is, deputies raided the wrong home, beginning a nightmare for the Gosses in which they were wrongly detained and their property was seized on false premises.

The warrant executed by the Creek County Sheriff's Department authorized a raid at 283 Navajo Place, naming one Larry Tatro as the person from whom an informant purchased marijuana on more than three dozen occasions. When Donald, a disabled veteran, returned from his fishing trip, he found his home surrounded by law enforcement and his wife under the watch of a deputy.

The Gosses, both of whom are senior citizens, told the deputies that the did not know Tatro and that they had raised the wrong home, but their words fell on deaf ears. Deputies insisted they were in the right place, claiming that they had been watching and seen a lot of traffic to and from the home. Eventually, a deputy found a baggie behind their couch and claimed that it was meth. A subsequent search with a drug dog found no trace of illegal drugs in the home.

Deputies seized firearms, a pick-up truck, and a boat and arrested the Gosses. "Right before we were arrested, the arresting officer said, ‘do you own this truck?’ I said ‘yes we do,’ and he said, ‘it's good. I'm taking it,'" Linda recalled in a recent story on Oklahoma's civil asset forfeiture laws.

The Gosses were charged with three felonies, including possession of meth. Bond was set at $50,000 each. During their three-day stay, the Gosses were intimidated and deprived of medication. Deputies tried to coax a confession out of Donald offering to let his wife walk free. Gosses posted the bond and were released.

The Gosses entered "not guilty" pleas at their arraignment in mid-April 2012. In the months between the incident and a preliminary hearing set for July, the couple submitted drug tests to the Creek County District Attorney's office showing that they were clean. The prosecutor overseeing the case actually tried to leverage the situation by urging the Gosses to change their plea to "guilty."

In August, after months of negotiations with the prosecutor, during which the Gosses attorney explained that the Creek County Sheriff's Department had raided the wrong home and none of the identifying material cited in the search warrant matched, the prosecutor moved to dismiss the charges after tests on the baggie found behind their couch came back negative for any illicit substance. While they were free, the Gosses' victory was only partially complete. Not only had they spent thousands of dollars they did not have on their defense, the property wrongfully seized by deputies was badly damaged or not returned at all.

A civil rights lawsuit filed on their behalf against the Creek County Board of Commissioners notes that the Gosses' boat "was returned...with holes either drilled or punched into the hull." The battery was also removed from the boat. Firearms that were returned "were damaged and rusty." Two firearms seized in the raid were not returned. Their truck was long gone. The creditor foreclosed on the loan for the truck and sold it at auction. To add insult to injury, Donald's credit report was hit with a deficiency as a result. Other items in the truck, including Donald's camping equipment and generator, were not returned.

The lawsuit the Gosses filed seeks total damages of $150,000 ($75,000 each) related to several complaints, including unlawful search and seizure, false arrest and imprisonment, the taking of personal property without due process, emotional distress, and malicious prosecution. Though a federal court ruled against them in October 2014, they have appealed to the Tenth Circuit Court of Appeals.

The Gosses are also urging Oklahoma lawmakers to change the state's terrible civil asset forfeiture laws. After her own devastating experience with the justice system, Linda said, “It, it stuns me. I mean, at least they ought to find out if they're really innocent or not." Though met with fierce and unreasoned resistance from law enforcement, SB 838, introduced by state Sen. Kyle Loveless (R-Oklahoma City), would restore the presumption of innocence in civil asset forfeiture cases by requiring a criminal conviction before connected to illicit activity can be subject to forfeiture.