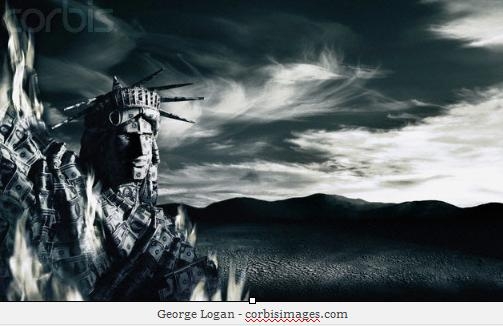 The U.S. Commerce Department just revised their 1stquarter GDP growth estimate from last month's 2.2% to an even sicklier 1.9%.  And, after-tax corporate profits dropped over 4%, which is the biggest decline in three years.

According to Fox Business,

U.S. economic growth was a bit slower than initially thought in the first quarter as businesses restocked shelves at a moderate pace and government spending declined sharply.

Gross domestic product increased at a 1.9 percent annual rate, the Commerce Department said in its second estimate on Thursday, down from last month's 2.2 percent estimate. The economy grew at a 3.0 percent rate in the fourth quarter.

The report also showed that after-tax corporate profits dropped for the first time in three years.

Greece’s (and Europe’s) dooms day is looming.  On June 17th, Greek voters will reveal a newly elected government that is either in or out of the euro, setting the trajectory of Europe's fate.  But, Europe’s financial chaos has become a real-time spectator sport beyond Greece.  After a mass run on their banks, the frenzied Greeks have lobbed the hysteria ball to the Spaniards.  The Bank of Spain just released news of a record $82 Billion dollar massive capital flight out of Spain’s banking system.  Spanish citizens, frantic to save themselves from their country’s escalating fiscal peril, are emptying the banking system’s coffers at a record pace.

Via Drudge, according to Reuters,

Spaniards alarmed by the dire state of their banks are squirreling money abroad at the fastest rate since records began, figures showed on Thursday, and the credit ratings of eight regions were cut.

Spain is the next country in the firing line of the euro zone's debt crisis, with spendthrift regions and shaky banks threatening to blow a hole in state finances and pushing funding costs towards levels that signal the need for a bailout.

That helped lower the risk premium investors demand to hold Spanish 10-year debt rather than the German benchmark on Thursday, but it remained close to the euro-era record, at 520 basis points.

Bank of Spain data showed a net 66.2 billion euros ($82.0 billion) was sent abroad last month, the most since records began in 1990. The figure compares to a 5.4 billion net entry of funds during the same month one year ago.

Spaniards are worried about the health of their banks, hit by their exposure to a 2008 property crash, and have been sending money to deposit accounts in stronger economies of northern Europe.

The dysfunctional nanny-state model is collapsing entire economies all over the world, including our own.  But, in the face of local and global government-meddling insanity, Mayor Bloomberg decides to pile on more for the 'poor-decision-making adult infants' of New York.  With his city's debt reaching $100 Billion at the end of FY 2011, Bloomberg has decided to introduce new confusion and mayhem to the lives and economy of the locals with his sweeping prohibition of sugary drinks.  Because regulating the free market, and squashing individual free will, is always the solution when Liberals have power, and any scheme that is an anathema to our Constitution is a magnet for them to impose.  Why not?  Socialism works...for the bureaucrats in power.  The populace can just eat cake celery.  When the world around us is collapsing, the insane logic of the Left is to micro-regulate.