The U.S. is expected to hit the $16.4 trillion debt ceiling by the end of February.

That means that we can expect more partisan bickering in Washington over whether to raise the debt ceiling—with or without spending cuts. It has now become typical for Washington to stumble from one manufactured crisis to the next instead of fixing the root cause of the problem.

Maybe, just maybe, if Washington actually gets serious about cutting spending then we wouldn’t have to go through the same tired debt ceiling drama nearly every single year.

Last time that politicians raised the debt ceiling, the American people were promised spending cuts. We were told that we would get $1.2 trillion in so-called spending cuts over the next ten years. But with the failure of the Super Committee to reach a deal, we didn’t even get that. The debt ceiling was raised and we ultimately ended up with a bad deal: no real spending cuts and steep tax hikes.

Now some lawmakers are discussing a short-term debt ceiling extension to buy more time for negotiations. In other words, Washington wants to keep kicking the can down the road to avoid the tough issues like entitlement reform.

At this point, one has to ask, what is even the point of having a debt ceiling if politicians just raise it as needed to finance their drunken spending spree?

This chart complied by the Atlantic shows how U.S. debt moves in sync with the debt limit: 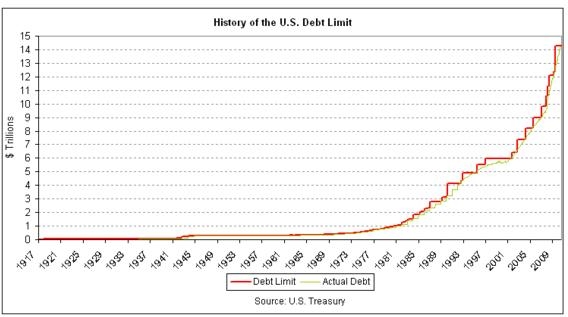 The first debt limit was set in 1917 to cap the amount of debt the federal government can legally borrow. As CNN writes, “in theory, the limit is supposed to help Congress control spending. In reality, it doesn't.” The debt ceiling has been raised 11 times since 2001 and federal spending has skyrocketed with no signs of slowing down.

Most Republican politicians are against raising the debt ceiling (without spending cuts—at least) under Obama. But most were all for it during the George W. Bush administration.

Most Democrat politicians are for raising the debt ceiling under Obama. But most were all against it during the George W. Bush administration. Like then Senator Obama—who opposed raising the debt ceiling— said in 2006, "the fact that we are here today to debate raising America's debt limit is a sign of leadership failure. It is a sign that the U.S. government cannot pay its own bills."

It’s time that Congress gets serious about cutting spending and reducing the debt.

NO to a clean debt ceiling hike.

My money is on we go the way of the Weimar Republic. The federal governments obligations are more than the value of the entire country.

A Freedom Guide to Debt and Sequester

Democracy and Power 104: Future Debt BurdenA government debt is a government claim against personal income and private property – an unpaid tax bill. —Hans F. SennholzA Freedom Guide to Debt and Sequester Here is a quick guide on debt and sequester, plus related articles for more in depth study of what's currently happening in American politics.

Bookmark this page to help you keep up with the big budgetary debates in Washington.

On February 5, the Congressional Budget Office released a report titled, "Macroeconomic Effects of Alternative Budgetary Paths". Full disclosure: even to us policy wonks, this report sounds a bit dry. Not exactly 50 Shades of Grey, if you know what I mean. But this report did contain some very interesting nuggets. Prepared at the request of the Chair of the Senate Budget Committee, Patty Murray, I'm certain that it came as a bit of a surprise.

Yesterday, the Senate voted to raise the debt ceiling through May 19th, 2013, which will allow the federal government to rack up about $450 billion in new debt.  The bill, H.R.

Dear FreedomWorks member,As one of our millions of FreedomWorks members nationwide, I urge you to contact your U.S. Senators and urge them to vote YES on the Toomey amendment to H.R. 325.  This amendment contains Senator Toomey’s “Full Faith and Credit Act”, to require the Treasury to fulfill critical payment obligations in the event that the federal debt limit is exceeded.

Dear FreedomWorks member,As one of our millions of FreedomWorks members nationwide, I urge you to contact your U.S. Senators and urge them to vote NO on H.R. 325, a bill which would lift the U.S. debt limit without a dollar cap for four months (until May 19, 2013) with no accompanying spending reforms or reductions.

Chart: Federal spending and receipts in one image (FY 2013)

Key Vote: See Whether Your Representative Voted to Raise the Debt Ceiling Here!

Today the House of Representatives voted to extend the government's borrowing authority until May 19th - essentially granting a "clean" four-month rise in the debt ceiling. The bill, H.R. 325, passed 285-144, with 33 Republicans and 111 Democrats voting against it. See how your representative voted HERE.

0
01/23/2013
The Fiscal Cliff Comes Back to Bite Voters: How Should Republicans Respond?
"https:\/\/www.freedomworks.org\/content\/fiscal-cliff-comes-back-bite-voters-how-should-republicans-respond?social=facebook_share"
null
https://fw-d7-freedomworks-org.s3.amazonaws.com/styles/thumbnail/s3/te_social_media_share/fw_default_0.jpg?itok=35IWEBMb
Blog

The Fiscal Cliff Comes Back to Bite Voters: How Should Republicans Respond?

As the first paychecks of 2013 were deposited into accounts earlier this month, some workers undoubtedly wondered why their take-home pay seemed lighter than in December. The reason was simple: the fiscal cliff deal is now beginning to rear its ugly head in the form of a payroll tax increase. Oddly, no one seemed more surprised than Obama supporters themselves.  “What happened?” rang out among liberal blogs and message boards.