On May 16, 2011, the US public debt once again reached the debt ceiling (the legal cap set by Congress for how much the United States is allowed to borrow). The United States’ debt now stands at around 14.3 trillion dollars.  A quick visit to usdebtclock.org shows that the United States now owes around $46,000 dollars per citizen and over $129,000 per taxpayer. Those are big numbers; numbers big enough to get many lawmakers on both side of the aisle talking about reducing the deficit. Bringing the deficit under control will require Congress and the White House to overcome their spending addiction and make the “painful” spending cuts necessary for us to live within our means. But even if the government is able to make the spending cuts necessary to reign in America’s out of control deficit, it will not be the end of the United States’ financial problems.  The real problem is that as large as America’s 14.3 trillion dollar debt may be, it is dwarfed by the United States’ unfunded obligations from entitlement programs.

The big three entitlement programs: Social Security, Medicare, and Medicaid, are the elephant in the room that most of the government wants to ignore. They have been called the third rail of American politics, in reference to the electrified third rail found on many train tracks which gives a dangerous shock to anyone foolish enough to touch it. Many Republicans are afraid to seriously pursue fundamental changes to entitlement programs that might cut into their constituents’ benefits, and many Democrats refuse to even consider large scale entitlement reform. However, no matter how much we would prefer not to talk about it, entitlement spending is not an issue that we can continue to ignore. The United States is estimated to owe about $7.7 trillion in unfunded Social Security obligations, and an astounding $37.9 trillion in unfunded Medicare liabilities. To put that in perspective, $37.9 trillion is more than two and a half times greater than America’s 2010 GDP.

According to the Congressional Budget Office’s estimates, the cost of entitlement programs will continue to grow so that the problem gets even worse the farther you look into the future. The CBO estimates that by 2020 Social Security, Medicare, and Medicaid will make up a combined 45% of all federal spending. In contrast, the same estimate predicts that defense spending will make up 16% of the 2020 federal budget. But the real problem comes when you start to look 40 to 50 years down the road. According to estimates put out by the CBO, sometime around 2060 spending on Social Security, Medicare, and Medicaid alone will exceed the total of all federal revenues. Even if the federal government was able to forgo all other spending, it would still reach a point where it is unable to raise enough revenue just to pay for the big three entitlement programs! Of course, the federal government spends trillions of dollars a year in defense and discretionary spending, meaning that out of control entitlement spending is likely to lead to a financial crisis well before 2060. 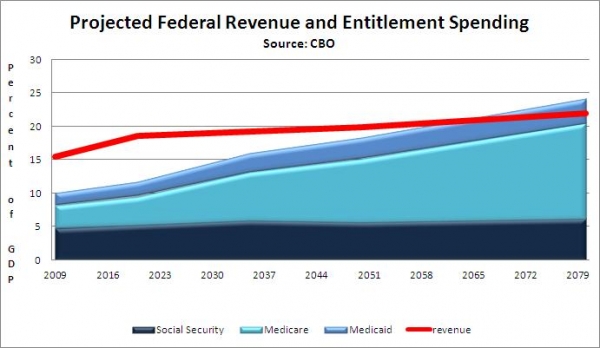 The 2010 edition of the annual Social Security trustees’ report recognizes that the Social Security trust fund’s future obligations will exceed its current assets and projected income, yet cheerfully maintains that, “informed discussion, creative thinking, and timely legislative action” will be enough to keep Social Security above water. Politicians and beneficiaries alike may wish that the big three entitlement programs simply continue function as usual in the future, but the hard truth is that the numbers simply do not add up. For the last two years the independent actuaries tasked with reviewing the Medicare trustees’ report have not agreed with the government’s rosy predictions for the future of Medicare. As the actuary reviewing the 2010 report noted, “the financial projections shown in this report for Medicare do not represent a reasonable expectation for actual program operations in either the short range … or the long range.”

Economic reality dictates that without serious reform to entitlement spending the United States is headed toward a financial crisis. The money necessary to pay off all of the United States’ projected entitlement obligations simply does not exist and will never exist.  Clearly, entitlement spending needs to be honestly examined, and serious reforms need to be made. Any legitimate plan to deal with America’s deficit problems cannot afford to ignore Social Security, Medicare, and Medicaid.