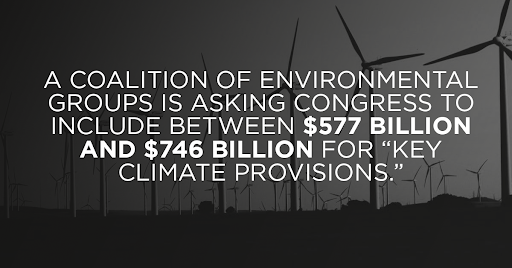 (CNN) -- As Democratic lawmakers begin crafting a massive $3.5 trillion budget reconciliation package this week, a coalition of prominent environmental groups is asking them to include between $577 billion and $746 billion for key climate provisions.

In a letter delivered to members of Congress on Tuesday and shared exclusively with CNN, groups including the League of Conservation Voters, Climate Power, the Natural Resources Defense Council, the Center for American Progress and the Sierra Club laid out what they called a "climate test" of programs they want lawmakers to support, including a Clean Electricity Payment Program, tax credits for clean energy and electric vehicles, and an end to fossil fuel subsidies.

"The point of the climate test is to say it's all the red line," Christy Goldfuss, senior vice president of energy and environment policy at the Center for American Progress, told CNN, indicating the groups consider the entire package of requests a must-pass. "If you look at the total package here, it's a fraction of the $3.5 trillion they're talking about."

It calls for Congress to fund at least a $150 billion Clean Electricity Payment Program, which would provide incentives and payments for electricity suppliers to gradually increase the amount of clean electricity they produce, and at least $20 billion for grants and rebates to make homes more sustainable and energy efficient. The letter seeks at least $27 billion for a Clean Energy and Sustainability Accelerator -- also known as a green bank -- which would leverage private funding and work to get more clean energy projects to disadvantaged communities.

READ THE REST OF THE ARTICLE OVER AT CNN.