The Establishment Wants Us To Fall In Line

Wisconsin Governor Scott Walker appeared on Fox News' Huckabee show to explain that Republicans shouldn't challenge incumbents in primaries until their party controls Congress. Incumbent job security generates voter apathy, and leads to the kind of government we see in our country today. Primary challenges are a way of letting elected officials know that they still have people to answer to, and challenges should be welcome in every election cycle.

Let's talk about how Republicans need to turn the tide to win elections, because nobody questions your, I think, credibility as a conservative. But you have not taken the idea that we need to tear down other conservatives.

Huckabee plays games with the term "conservative," using it interchangeably with "Republican." Politicians and be both conservative in their beliefs and policy preferences and establishmentarian in their outlook. It's a question of how much they value their ideals versus how much they desire the acquisition and retention of political power. Saying a politician is a "conservative" gets you nowhere.

The "tearing down other conservatives," line appears to be a passive-aggressive swipe at Republican infighting all its own; a subtweet acted out live on national television.  Huckabee can only be referring to conservative groups primarying Republicans, about whom Huckabee wants desperately to use the term "conservative."

Huckabee later asked Walker if divisions in his state's GOP would have stymied reform efforts in Wisconsin. Walker responded they would have (though what all of that has to do with primary challenges is unclear). Then Walker added,

So Walker wants no primary challenges -- particularly for Representative Paul Ryan (R-WI) -- until the House and Senate are safely in Republican hands.

Walker said he wants to put "the power back in the hands of the American people."

Huckabee and Walker appear to believe the fallacy that primary challenges make it more difficult to win the general elections that follow. Whether or not that's true really depends on the candidates involved. 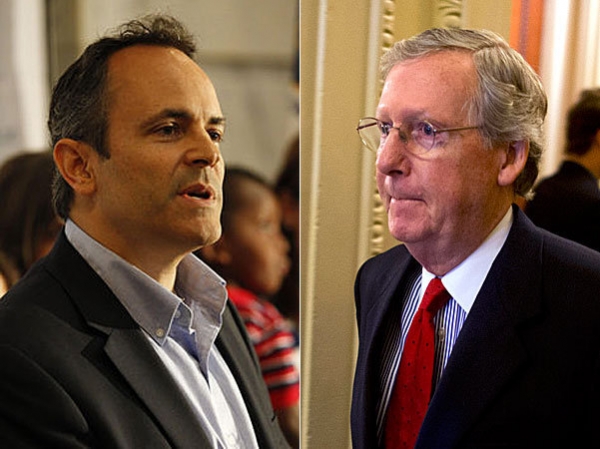 For instance, a relatively popular incumbent who strays from his party's platform on an issue or two may have a harder time in a primary than in the general. But a DC politician out of touch with the mood of his constituents focused only on attack ads and committee appointments might lose that primary.

Conservative staffers and outside groups no longer have to depend on the Republican insiders to pay the bills, and are free now to disagree. Some conservative groups are using that freedom to try to replace Senate Minority Leader Mitch McConnell with Kentucky conservative businessman Matt Bevin.

In a December poll by the partisan Democrat PPP Polling, McConnell was neck-and-neck with Democrat Allison Grimes in very conservative Kentucky. McConnell had a 61% disapproval rate, according to the poll.

At Redstate, Erick Erickson says it's Us versus Them, and the GOP will either try to win the votes of people who believe in limited government and liberty, or it will try to win votes from the left. In either case, he says, we have no choice but to act:

You may think you can sit it out. You may not want to get dirty. But you do not have a choice. You will either stand with the labor unions and crony capitalists funding the establishment, or with the conservative fighters funding freedom loving candidates.

People who vote in primaries tend to vote in the general election that follows. The best way to get people to vote in a primary is to have more than one candidate on the ballot, to give them a choice. Most of the time the incumbent will win. But sometimes, the incumbent may stumble, or a particularly well-organized and well-regarded challenger may carry the day.

But win or lose, this is our system. Our government is run by, and for the people. It's ironic that Governor Walker says he wants to return power to the people by denying them an opportunity to choose.