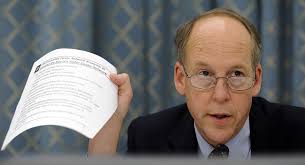 The name of the game was transparency during Wednesday’s Communications and Technology Subcommittee hearing, where several proposed draft bills were voted to move forward to the full committee. The proposed bills were introduced in light of the FCC’s recent Open Internet Order, a massive new regulatory regime that prompted many complaints about the process under which it was released. Subcommittee Chairman Greg Walden opened the hearing with remarks on the overwhelming need for the FCC to change its decision making process in such a way as to increase transparency and consumer access. Chairman Walden stated, “[t]he FCC’s work doesn't only impact the industries that it regulates, but as daily consumers of communications services, our own lives as well.”

In today’s society, technology touches almost every part of our lives. We use it daily and we use it constantly. Recognizing this, Chairman Walden emphasized in his opening statement, “[t]his is why it is so important to make sure that the FCC functions in an effective, transparent manner.” Over the years and as technology has progressed, the FCC continuously “falls short of the standard for a well-run agency.”

During Wednesday’s hearing seven bills were brought before the subcommittee for a vote. There was tremendous bipartisan support for necessary and meaningful reform in how the FCC conducts its decision-making process.The FCC was greatly scrutinized when the agency adopted the Open Internet Order, a policy that imposed archaic Title II common carrier regulations on the most dynamic sector of the economy. The Internet Order was over 300 pages and was never openly debated or even released to the public. People directly affected by the policy never had a chance to read it, understand it, or provide comments. The agency justifies its secretive discussions and keeping the public in the dark. According the FCC, “allowing the Commission to engage in frank, non-public discussions improves the decision-making process….” Essentially, a government agency dictates that it is in the public’s best interest to not know the policies that affect their lives.

In light of the secretive process in which the Internet Order was adopted, the proposed draft bills before the subcommittee presented sensible, straightforward solutions to create greater transparency and public participation in the FCC’s decision-making process. Among the propositions passed, the FCC would be required to release information related to its decisions to the public, and the FCC would have to publish orders as they are circulated for a vote among commissioners. There was also a proposal for the FCC to partner with small businesses in the agency’s rulemaking procedures, a requirement that items adopted on delegated authority be listed 48 hours before becoming effective, and a requirement to release to the public new rules the day they are adopted.

The favorable passage of the draft bills not only represented forward-moving traction for transparency in the FCC, but also demonstrated a successful bipartisan effort to create necessary solutions. Chairman Walden commented, “[t]hese bills all go to the same purpose-to tighten up an agency, where only insiders know how to work the levers; to shine light into dark corners of the FCC.”