The FDA Is Trying to Ruin the Mobile App Market 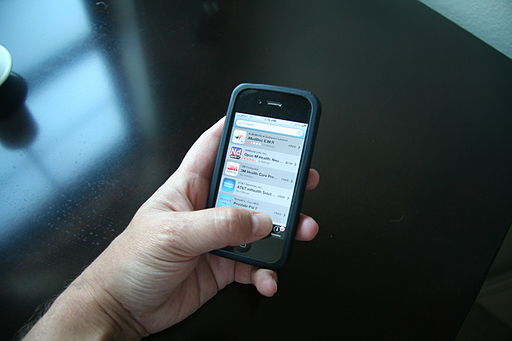 The FDA doesn't want you doing this.

In most basic economics textbooks, which, for all their faults, mostly recognize the virtue of free markets, the only rationale given for government intervention in the economy is a so-called “market failure,” a situation where no efficient outcome can be reached purely through voluntary exchange.

The concept of economic efficiency, and indeed of “market failures,” is severely flawed, but given that the intellectual class still regards it as valid and the basis for all economic policy, let’s leave that discussion for another time and focus on policies that fail to adhere even to their own terms.

FDA regulations are a great example of a solution in search of a problem, particularly those targeting the new, booming market for mobile apps dealing with health care related issues. The Food and Drug Administration has become such a fixture of American life that far too many of us can scarcely conceive of a world without it. Think of all the poisonous food and deadly drugs kept off the market because of these kindhearted souls, selflessly directing what can and cannot be sold to eager consumers by willing vendors. Of course, no one ever thinks about all the lives lost as result of good medicines delayed from being sold to sick people during the rigorous review period, but even if you think there is a role for such an agency, there is one area of regulation that should seem unambiguously sinister to anyone who cares about consumer well-being.

Since the development of the mobile app market, individual entrepreneurs have been rapidly exploring new and innovative ways to provide heretofore undreamt of, or impossible services to the public at large. Formerly the sole province of huge software conglomerates pandering to a small segment of tech-savvy users, now anyone with basic coding skills can attempt to enter the market and sell their product to anyone with a smartphone.

It goes without saying that this new business model has been a boon for consumers, and one of the most fruitful areas of development has been in that ever-popular area of health care. With ObamaCare already making insurance more expensive and doctors more rare, the more that people are able to be self-sufficient with regard to minor health problems, the better. Individuals can monitor glucose levels, detect cancerous moles, set up reminders to take their medicines, and countless other helpful features all from the comfort of their own homes. [But the FDA isn’t having any of it.](But the FDA isn’t having any of it.)

Despite the fact that no market failure exists, or at least none has been demonstrated, the agency nevertheless feels the need to intervene in one of the most exciting and innovative markets out there. The first and most obvious objection is that mobile health care apps contain neither food, nor drugs, leading inexorably to the question of why the Food and Drug Administration is getting involved at all. The second question is, who is being hurt by these devices in such a way that regulation can even be justified?

The FDA has long been involved in regulating medical devices, things that can directly affect a person’s health, but the new expansions being proposed would allow them to delay services that are purely informational—apps such as WebMD or other sites offering dietary advice or diagnostic help. This is a slippery slope that has worrying implications for freedom of expression.

Without demonstrating any concrete examples, officials have expressed concerns about people being given “bad advice” by unapproved apps. I beg your pardon, but since when has giving “bad advice” been something that the federal government has been able to regulate? The First Amendment to the U.S. Constitution expressly prohibits any abridgement of the freedom of speech. Is advice, bad or otherwise, no longer considered speech? No one is forcing anyone to follow the advice they get, or even to solicit the advice in the first place. The government has no business stepping in between sellers and buyers who are, after all, doing nothing but exchanging ideas.

Most importantly, allowing the FDA, which has neither the time nor the manpower to keep up with the flood of new apps, the power to block new products from coming to market until they have had time to review them means that consumers have fewer options to manage their own health. It is easy to measure casualties when a defective product causes sickness or death. It is much harder to measure them when a helpful product is intentionally withheld from people who want and need it.

The FDA has unilaterally decided that the latter costs are preferable to the latter, in all cases. Wouldn’t it be better to let consumers decide on an individual basis, and let them assume the risks they feel comfortable with while declining those they don’t?

We know that one-size-fits-all solutions never work. The FDA needs to stop holding back innovation and allow new health technologies to flourish in a free market setting.