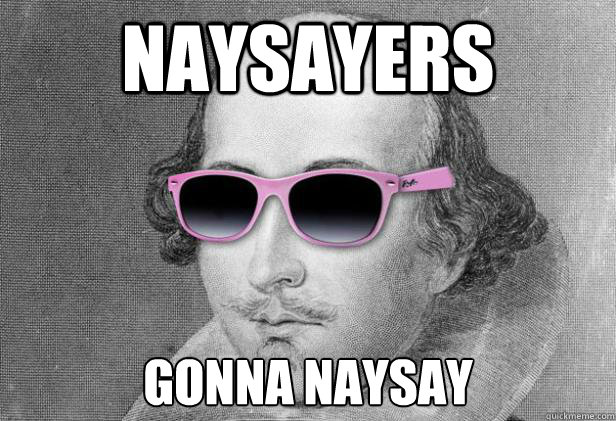 Recently, it was exposed that the US federal government recently spent $95,700 to adapt Shakespeare's classic tragedies and comedy's into wordless performances. You read correctly, wordless performances, a poetic "tragedy" in itself! According to a recent Fox News article:

"The National Endowment for the Arts (NEA) and its state agency the Virginia Commission for the Arts has funded numerous shows from the Crystal City-based Synetic Theater, including a production of Hamlet without words, making the title character’s “To be or not to be” soliloquy slightly less potent. The Wall Street Journal bemoaned the dumbing down of Shakespeare, noting Shakespeare’s plays “without puns is like French cooking without butter...”

As of now the Synetic Theater has already adapted (some would say destroyed) Macbeth, The Tempest, and A Midsummer's Night Dream. Around $60,700 from NEA’s Virginia Commission has already been allocated for the Arts in 2013 alone, as well as an additional $15,000 to develop a “movement-based wordless performance" of Twelfth Night in 2014.

Wasteful and ridiculous spending alone in the past year and a half isn't being thrown at wordless performances alone, Republican Senator Tom Coburn last October brought to light numerous cases where the federal government threw money where no government should. Coburn pointed out that in the year's Wastebook that it "...does not show the $5,210 that the State Department tried to spend on a blowup, human-size foosball field for an embassy in Belize."

The buck didn't stop there, though, as "the U.S. government is spending $750,000 on a new soccer field for detainees held at Guantanamo Bay," and as if things couldn't get any stranger, they did. The government went and spent $175,587 “to determine if cocaine makes Japanese quail[s] engage in sexually risky behavior."

This wasteful destruction of tax payer money is what has caused an increase in the distrust of elected officials; economist Arthur Laffer once spoke of government spending bluntly:

What I'm not saying is that all government spending is bad. It's not - far, far from it, but there is no free lunch, as a former colleague of mine used to say. There is no public tooth fairy. Father Christmas does not work on the Treasury staff this year. You can never bail someone out of trouble without putting someone else into trouble.

To put the bottom line up front in terms of wasteful spending, the question at the end of the day should be, "to be or not to be?"