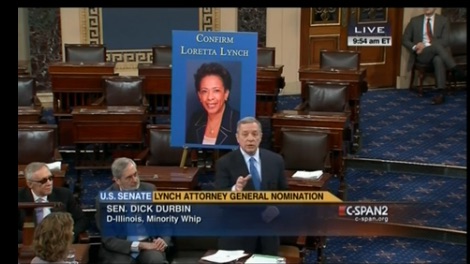 On the Senate floor Durbin said:

“And so Loretta Lynch, the first African-American woman nominated to be attorney general, is asked to sit in the back of the bus when it comes to the Senate calendar,” he said. “That is unfair. It’s unjust. It is beneath the decorum and dignity of the United States Senate. This woman deserves fairness.”

The National Journal also reports that the Black Caucus head G.K. Butterfield claimed the holdup on the Senate vote is because she is black saying, “I think race certainly can be considered as a major factor in the reason for this delay.”

Of course, her race has nothing to do with the pace of her confirmation process but leftists like Durbin and Butterfield need to create news and controversy any way they can.

There are many big issues on the minds of senators as they consider the nomination of Loretta Lynch to serve as the next attorney general. But among the most concerning is that she has made it very clear that she'll continue the astonishing pattern of overreach to support warrantless spying, and she'll do it under the guise of narratives that have long been debunked.

After Eric Holder announced his resignation from Attorney General for the Obama administration, the President announced his nominee to replace him, Loretta Lynch. Ms. Lynch has experience as the chief federal prosecutor in Brooklyn, NY, and has a largely apolitical track record, leading experts to believe Lynch should have no issue securing Senate confirmation.