Today marked what was to be the final deadline for states to submit their plans for a state-federal partnership to set up a health insurance exchange in order to comply with ObamaCare.  However, with 27 states currently refusing to set up their own exchange, the Department of Health and Human Services (HHS) now finds itself needing to set up its own exchange in each of these states before the statutorily mandated October 1st deadline.

Grassroots activists have made their mark on the fight, sending nearly 40,000 messages via blockexchanges.com to let their top state officials know that assisting the government in creating an exchange is unacceptable.  In North Carolina alone, over 6,700 people sent messages to Governor McCrory, who finally decided to overturn the exchange that had been started by his predecessor Gov. Bev Perdue.

Below is a map showing where each state stands on the health insurance exchanges (a bigger version is attached below this post): 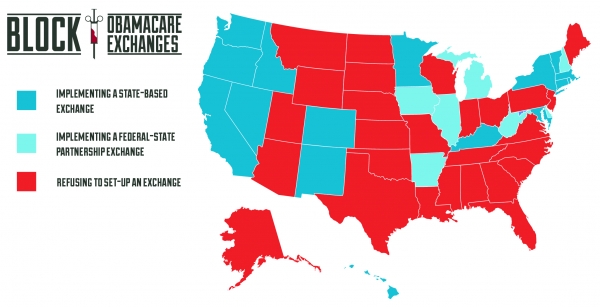 HHS has responded to the states' resistance with increasing desperation.  They have repeatedly pushed back the deadlines for states to start setting up an exchange.  In states which are working with the government to set up an exchange, the deadlines to finalize their exchanges have been suspended entirely. The administration has also attempted to re-brand the exchanges, attempting to convince the states that HHS will not be too intrusive in the insurance markets (while still noting that the feds will have the final say on everything).  Finally, starting in 2013, HHS has tried to make the exchanges sound more friendly by calling them "marketplaces".

Despite pressure from HHS and the insurance industry, governors and legislators in a majority of the states recognized that setting up their own exchanges would be a bad deal, in which states absorb the cost and effort while the government keeps absolute control.

Even if the administration succeeds in setting up all of the exchanges in time (which seems increasingly unlikely), ObamaCare faces an obstacle of its own making - a defect in the text of the Patient Protection and Affordable Care Act (PPACA) that does not allow federally created exchanges to fully work.  The law specifies that only state-created exchanges can distribute the premium subsidies that are necessary to entice people to participate in the exchange, and also makes it impossible for a federal exchange to effectively enforce the mandate that forces businesses to insure its employees.  You can find a more detailed breakdown of how this causes ObamaCare to break down HERE and HERE.

And all that states had to do to throw a wrench in ObamaCare was refuse to comply with an expensive, cumbersome, intrusive government mandate.

Remember that even now states which have opted out of the exchanges can choose to take over operation of the federal exchanges.  See where you state stands, and Take Action at blockexchanges.com!