First Round of the ObamaCare Exchange Battle Goes to the States

Today is an important day - we're one giant step closer to reversing the government takeover of our health care.

The deadline for states to begin setting up their own, state-run health care exchange under ObamaCare was today, December 14th. This deadline was a crucial trial for ObamaCare, and the verdict is in -- 26 states, a majority of the union, are currently declining to set up an exchange.

Below is a map of how each state stands on the exchanges: 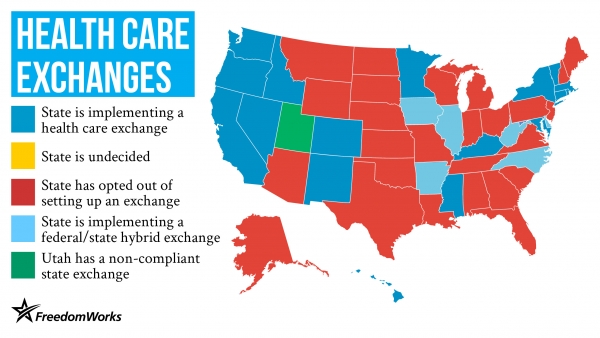 Many states took a long time to decide their course of action, and even some solidly anti-ObamaCare governors appeared to wrestle with the idea of creating a state-run exchange. In the end, though, most realized that creating a state exchange would just set their states up to bear millions of dollars in costs, while increasing the costs of health care for all of their residents.

And, of course, having several thousand concerned citizens flooding their inboxes and phone lines certainly entered into these states' calculus.

FreedomWorks' grassroots activists made their own impact on their states' decisions, sending over 35,000 messages to their top state officials, asking them to stand against ObamaCare's costly mandates by refusing to set up an exchange.  Many of these states subsequently declared their intention to opt out of the exchanges, including Wisconsin, Alabama, Georgia, Pennsylvania, Tennessee, and Arizona.

You can read a more detailed explanation of why it is so crucial that states force the federal government to set up the exchanges HERE and HERE.  But it boils down to this - the "Affordable Care Act" as written does not allow the insurance subsidies that are crucial to ObamaCare to be distributed through a federally created exchange.  In order to address this major flaw, Congress is going to have to reopen the health care law, and that gives us a chance to dismantle it and work on real, patient-centered reforms.

The states have taken the first step in making that happen - ObamaCare is in peril - but now the next step begins. States have until February to partner with the government to create a hybrid state/federal exchange, which would be just as bad as setting up a state-run exchange in most ways.  So it will be crucial to remain vigilant, and to keep the pressure on the states to stand their ground.

But so far, so good.

How do I find out which idiots to vote out of office for opting in in my state?