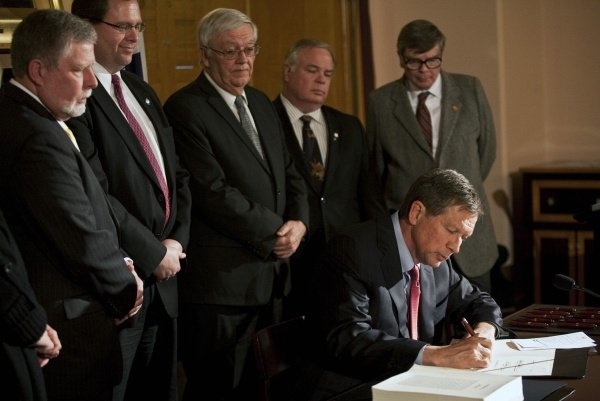 This important legislative victory comes just one month after Wisconsin Governor Scott Walker enacted a similar law to rein in government spending and reduce state debt in the Badger State. Saddled with billions in debt and a system of onerous taxes, Gov. Kasich hopes the passage of SB 5 will let people know that Ohio is back open for business.

'With some of the highest taxes in the country, Ohio is struggling to create a climate that is attractive to the businesses that create jobs.  Helping local governments reduce their costs so they can begin lightening Ohio’s tax burden helps us compete better against states that are far friendlier to job-creators," said Gov. Kasich on the passage of SB 5. "Re-leveling the playing field for taxpayers gives them the respect they deserve from the elected officials and government workers that serve them."

FreedomWorks has been organizing grassroots activists to support reforms to public sector unions across America. In states like Wisconsin and Ohio we've already been successful, but the fight to rein in public sector union power has only just begun in states like Indiana, Pennsylvania, Tennessee and more. That's why we need your continued support. Please consider a donation to FreedomWorks to support our efforts for lower taxes, less government and more freedom.

For the taxpayers of Ohio the fight for reform is far from over. Like in Wisconsin, union bosses have tied up the legislation in court and promise to get a ballot initiative for a statewide vote on SB 5 in 2012.

However, The Intelligencer/Wheeling News-Register notes, there is much in SB 5 that will gain voter support when they learn how the taxpayers of Ohio have been bilked:

For decades, many local and state officials have passed the buck in union negotiations on those [pensions, benefits, etc.] issues. Afraid to antagonize union leaders, they have granted health care and pension benefits that are lavish in comparison to those in the private sector.

Some local government employees in East Ohio enjoy health insurance benefits for which they have to pay as little as 10 percent of the premiums. Few private employers can afford that. Neither can Ohio taxpayers.

Pension programs for many public employees also are of the stuff private-sector dreams are made. Tens of thousands of Ohio government employees are permitted to retire, then go back to work collecting salaries while pension benefits continue to build up.

An idea of just how deeply in debt Ohioans have been buried by collective bargaining for public employees can be gained by a look at just one pension program, the one serving public school teachers. It has an unfunded liability of about $39 billion.

SB 5 has other provisions that will appeal to many voters. For example, automatic pay raises are banned in favor of performance or merit increases. Strikes by public employees are prohibited.

The unions detest such limits on their power. But we think Ohio voters will approve of them, once they learn just what SB 5 would do for the vast majority of Buckeye State residents. When voters go to the polls this fall, they will cast ballots based on facts - not the unions' propaganda.