Last night, in a last ditch effort to avoid the "fiscal cliff" the House passed a bill that sought to prevent tax hikes for all but the top 2% of American workers.  Taking a short break from his Hawaiian vacation, President Obama stopped by the White House to pat everyone on the back for bowing to his will. His speech should be laughable considering it followed a bill that is a joke, however, anyone that knows the details of the deal that was passed (with the help of 85 soon-to-be out of a job Republicans) certainly are not laughing. 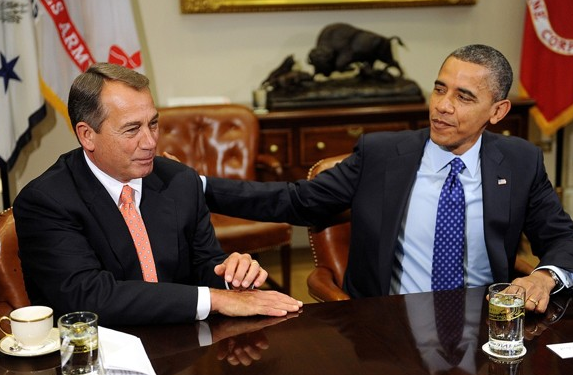 Obama started his statement proudly proclaiming that the top 2%, who dare to make more money, will be taxed more while the other 98% of Americans will avoid tax hikes that (supposedly) could have caused another recession; telling his first lie before he even said thank you to those who helped him.  In reality, payroll taxes will be going up due to a higher Social Security rate and all Americans will pay more out of their paychecksto the federal government.  For example, a family making $50,000 a year will now pay another $1,000 a year in higher taxes.  Since the government kindly takes the money from most Americans' paychecks before they see it, many may not notice the President's hand deeper in their pockets.

Obama went on to assure the public that he'd keep giving them "free" money to make up for the fact that unemployment remains higher than when he took office four years ago.  Interestingly, he claimed that the 2 million unemployed who continue to "pound the pavement" looking for jobs will continue to receive unemployment during their efforts; as long as they are "actively looking."  In reality, there are 12 million people unemployed, not counting the millions that have given up finding a job.  Over 5 million Americans are collecting unemployment and, unless Obama has a magic ball, there is no reliable way to measure whether they are actually looking for employment.

Finally, the President tackled the elephant in the room: the national debt. $620 billion in revenue is the expected amount raised and extracted from the 2% that the left so despises. Further, Obama will not allow Congress to not pay bills "they" have already incurred.  Again, it is what the President failed to mention that Americans may have wanted to know; like the $330 billion increase in spending that was also included in the bill.  What will the new spending be put toward?  Hollywood and NASCAR.  As for the bills Congress has racked up, Obama may want to take a look in the mirror.  ObamaCare takes the cake for a check written that can't be payed.

Overall, according to the Congressional Budget Office, the deal brokered last night to avoid the fiscal cliff will add $3.9 trillion to the deficit. That's right, nearly $4 trillion more lumped onto the American taxpayer.  Have we avoided the cliff? No, we are merely walking on the cliff, saving the fall for another more expensive day.