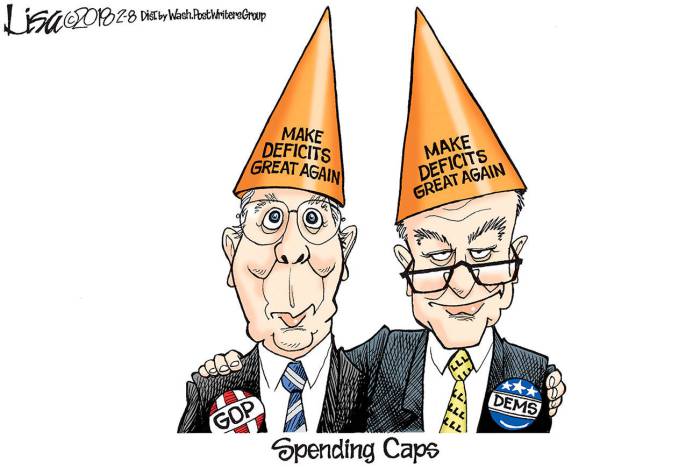 Separately, in June, the CBO released its long-term budget outlook, which offers a look at the budget over 30 years, from FY 2019 through FY 2048, and it's even more alarming. Over this time period, debt would increase from 78 percent in 2018 to 118 percent by 2038. By the end of the 30-year window, in 2048, the debt-to-GDP ratio would be 152 percent. The growth of the debt over this period is largely driven by the federal entitlement programs and service on the national debt.

The CBO makes its projections based on current law, and under current law, the individual tax cuts that were passed in the Tax Cuts and Jobs Act will expire at the end of 2025 and the spending increase passed by Congress in February will fall to 2015 budget levels at the beginning of FY 2020. Although the future of the individual tax cuts after 2025 is up in the air, although the House will try to make those permanent this year, few believed that the spending increase would be temporary.

Now, if the spending levels were to go back down in FY 2020, the CBO’s projections in the April budget outlook report would accurate, assuming no other changes were made to law and the economy didn’t experience a recession. The baseline scenario reflects the April budget outlook, meaning that current law is maintained and the debt-to-GDP ratio would be 98 percent at the end of 2028 and 118 percent in 2038.

The first alternative scenario assumes that Congress will maintain current spending levels, extend the individual tax cuts, and continue to delay certain ObamaCare taxes. Some other assumptions are also made. In this scenario, the debt-to-GDP ratio would be 105 percent in 2028 and 148 in 2038. 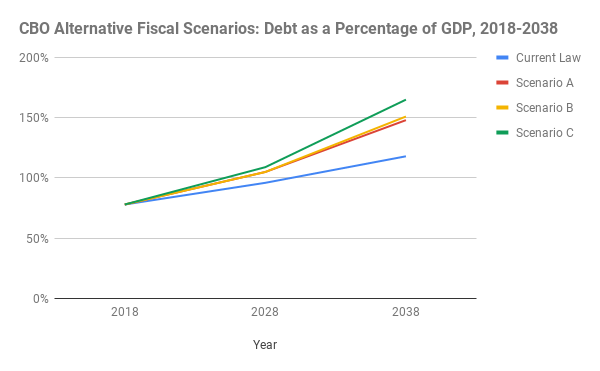 As noted, under current law and absent any significant changes, the CBO projects the debt-to-GDP ratio to be 96 percent in 2028, 118 percent in 2038, and 152 percent in 2048. The three alternative scenarios show that the debt-to-GDP ratio would either be close to 150 percent or over that threshold ten years earlier than projected should current policies be extended. Of course, this level of debt isn't sustainable. What's called a "debt drag" -- which begins when the debt-to-GDP ratio reaches the 77 percent to 90 percent range -- would mean slower economic growth. Decreasing confidence in the United States' ability to pay back its debt would also lead to higher interest rates.

Now, none of this is to say that Congress shouldn't extend the individual tax cuts that were passed under the Tax Cuts and Jobs Act by passing "tax reform 2.0." In fact, Congress should extend the tax cuts. But there has to be a concerted effort to reduce spending, and those spending reductions have to be more than discretionary spending.

There are other options such as a Swiss-style debt break, which would cap spending as a percentage of potential GDP. But every member of Congress who continues to vote in a manner that ignores the fiscal dangers the United States faces is quite literally robbing the next generation of Americans of opportunity and prosperity.

If you have so more thing to play but i want to say that please try this game for the one time https://wordunscrambler.online and i am sure if you use this then you can feel best.

The Congressional Budget Office (CBO) has released its much-anticipated score of the American Health Care Act (AHCA). Over the next ten years, the CBO estimates that federal revenues will decline by $882.8 billion as a result of the repeal, delay, or zeroing out of most of ObamaCare's taxes, and federal spending will be reduced by $1.219 trillion. Overall, the deficit would be reduced by $336.5 billion from FY 2017 through FY 2026 under the proposed legislation.

The Congressional Budget Office (CBO), on Tuesday, released its first budget outlook report of the new year, offering a look at the fiscal picture for the next ten years, FY 2018 through FY 2027. It isn't pretty.