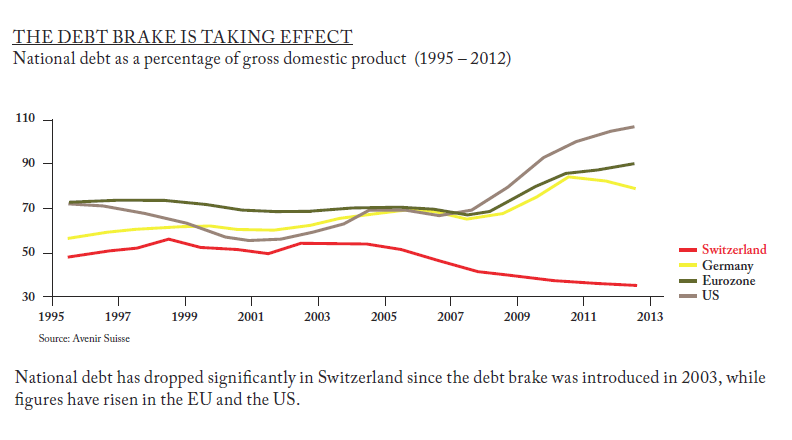 In 2003, Switzerland enacted a schuldenbremse, also known as a debt brake. This debt brake introduced a ceiling on government spending and made it so that expenditures must be financed mainly through revenues and not through an increase in public debt.

Now, over a decade since, the impact of this debt brake is clear. Switzerland’s debt has decreased, and this trend has persisted even through times of slow economic growth. When enacted, Swiss debt was around 50 percent of its gross domestic product (GDP), and today debt is right around 35 percent of GDP.

The Swiss people passed this wildly successful measure in a 2001 vote where 85 percent of voters approved the debt brake.

As Americans, we are very well aware of the staggeringly large amount of debt our government owes. And it doesn’t seem to matter who’s in charge either--the number grows like wildfire with no signs of dipping or of even reaching a plateau. Plainly put, this is unsustainable. We cannot continue kicking the can down the road only to burden future generations with what is already a Herculean task.

The Swiss debt brake is an excellent blueprint for Americans to consider, and one that comes with a proven track record. In 2011, proud of their accomplishment and with a desire to help, Swiss authorities and business leaders delivered a series of lectures in the United States in an attempt to inspire Americans to examine what had worked in Switzerland.

Not being a direct democracy like Switzerland, a representative needed to bring the debt brake into the American eye. The man who undertook such an attempt was Rep. Kevin Brady (R-Texas), who introduced the Maximizing America’s Prosperity (MAP) Act in the 114th Congress. There is a concise and readable summary available on Rep. Brady’s congressional website.

The MAP Act is not a copy of Switzerland’s debt brake--a few tweaks have been made to the plan. In the interest of stability, the MAP Act would cap spending at a percentage of potential GDP.

Potential GDP is what the GDP would be at under full employment and no inflation. One of the benefits of tying the cap to potential GDP lies in the fact that the cyclical nature of spending would be eliminated; spending would remain stable and predictable during economic booms and busts. Furthermore, spending would be able to grow even during a downturn--a factor of the MAP Act that will appeal to economists of the Keynesian school.

Two more provisions in the MAP Act must be mentioned. The first would require the president to prioritize all spending in the proposed budget. This sort of ranking will give Americans valuable insight into the goings-on of the administration and is a meaningful move towards transparency and accountability in government.

Another provision is the so-called “sunset commission,” which would eliminate all programs and agencies that Congress doesn’t vote to extend after a 12-year period. This sunset commission has the potential to streamline government and require agencies to demonstrate their effectiveness and worth.

Frankly, there’s something in the MAP Act for everyone. Progressives who fondly look on the economy during the Clinton administration should find the 16 percent figure comforting. Conservatives will be reassured by the effort to finally confront the debt clock, which every day looks more and more like a doomsday clock. Cosmopolitans will find the adoption of a European idea to be a step towards a better America. Libertarians will be eager to see restraints put on an ever-encroaching federal government. And all Americans will be more prosperous.

Though it is unlikely we will ever see our nation’s debt eliminated, it makes no sense to look on the problem through the lens of a defeatist. We should take action to reduce the debt, bring stability to spending, and increase the wealth of our fellow Americans. By adopting Brady’s MAP Act, we can say hello to a new era of prosperity. And to out of control spending, we can turn and sing: So long, farewell, auf wiedersehen, goodbye.