No-fault/Personal Injury Protection (PIP) laws are a prime example of the danger posed by the substitution of free market mechanisms for government mandates. In states with PIP laws on the books, the costs of insurance premiums are skyrocketing and rampant fraud and abuse of the system is to blame. PIP laws were put in place to protect the consumer but in states like Florida, consumers are faced with ever increased premiums to account for the impact of fraud on the system. Trial lawyers, doctors, and individuals are exploiting Florida’s no-fault laws and Florida’s citizens are paying a greater price every year.

Good Intentions, Disastrous Results
Florida’s PIP laws date back to 1972, when the state enacted a law requiring all drivers to purchase minimum coverage of $5,000, which has since been elevated to $10,000. One of the stipulations of non-fault/PIP coverage is that in the event of an accident, a policy holder may recover financial losses from the insurance company which the driver holds a policy. In the event that policy holder wins the suit, the insurance company is required by law to also reimburse the policy holder for any incurred attorney’s fees. Attorneys may also claim what is called a Contingency Risk Multiplier. With roots in the civil rights movement, this multiplier was put in place to help incentive lawyers to take up the cases of disenfranchised individuals, especially minorities. The multiplier is a formula that allows for attorneys to multiply their fees up to two and a half times the normal rate based on the strength of the case and the ability of the policy holder to obtain sufficient counsel. In all manners, the PIP law was well intended. Allowing individuals to sue their insurance company to collect damages in no-fault situations and incentivize attorneys to represent these individuals was seen as a way to protect those caught in truly unfortunate situations. The problem is that no-fault accidents and fee multipliers allow for fraud and abuse that is actually working against the common Florida driver, escalating premiums substantially.

Corrupt Clinics
PIP literally stands for personal injury protection, keying in on the fact that the PIP laws were designed to ensure that drivers in need of immediate and urgent medical care would be covered without delay. This means at a minimum, clinics and hospitals can provide up to $10,000 worth of care under PIP coverage. The problem is that this $10,000 minimum coverage has become closer to a target rather than a ceiling. With thousands of clinics granted exemptions from oversight, medical providers have been accused and convicted of providing excessive and unnecessary medical care in efforts to absorb as much of the $10,000 minimum coverage as possible per incident. Examples include unnecessary X-ray and MRI exams, miscoded diagnosis, and billing by alternative medical providers, like physical therapists and chiropractors, for non-existent treatments.

The Professional Accident
The ability to abuse the system in such a manner has created an entire industry based on fraud committed at every level. The ease in which medical providers can file fraudulent claims has incentivized individual and organized professional criminals to develop a series of tactics to compliment abuse committed by clinics. Some of the tactics used, as reported by 2005 report prepared by the Committee on Banking and Insurance for the Florida State Senate, are  as follows:

The Multiplier
The way the Florida PIP laws are crafted also benefits trial lawyers seeking to exploit insurance companies at the expense of the premium payers. Though somewhat separate from the issues at the claims level, the Contingency Risk Multiplier in place in Florida incentivizes trial lawyers to file an exorbitant amount of lawsuits against insurance companies seeking damages that have not been covered in PIP claims in addition to coverage of legal fees if the insurance company loses the case. However the 2.5 times multiplier has in many cases resulted in outrageous costs to the insurance companies over what can only be described as worthless damages.  The following documented case outcomes demonstrate the severity of the impact that the Contingency Risk Multiplier can have on insurance businesses:

Many other cases have seen similar results. Lawyers in No-fault cases have also been caught billing for client interviews that have never taken place, along with billing hours that exceed over 24 hours a day. Florida trial lawyers are essentially able to rob insurance providers blind at no expense to themselves or their clients because of No-fault/PIP laws and the Contingency Risk Multiplier.

Scope of the Problem
To what extent are these issues actually occurring? The data shows an alarming trend over the past few years that demands immediate action on PIP and insurance reform.

Registered Drivers and Reported Accidents
The number of licensed drivers in the state of Florida has remained relatively stagnant as the following figure shows: 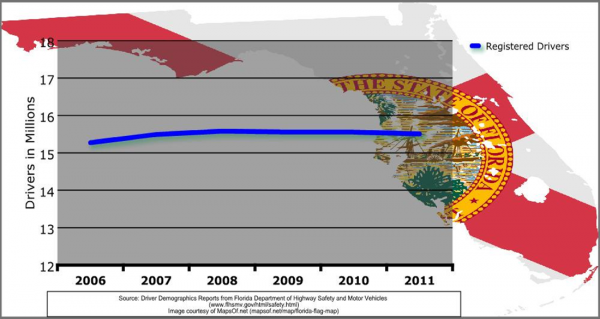 Despite the lack of new drivers and the decline in the number of accidents occurring, No-fault/PIP data is trending upward across the board, as the following figures from the Insurance Information Institute demonstrate: 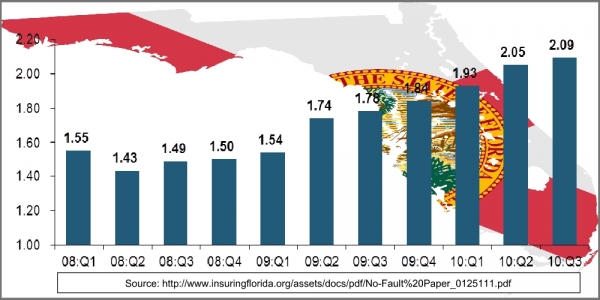 Of these new claims, a drastically increasing number are being referred to the National Insurance Crime Bureau and the Florida Department of Financial Services, Division of Insurance Fraud. 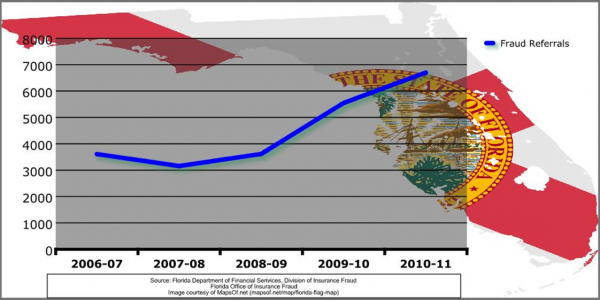 Consequences for Consumers
The scope of the abuse taking place in Florida is taking a heavy toll on the insurance companies’ ability to keep their products comprehensive and affordable.  To offset the massive payouts to fraudulent claims collectors and attorneys taking advantage of the Florida multiplier, insurance companies have been forced to hike premiums for all drivers. This has become known as the Fraud Tax, and it is draining hundreds of millions of dollars from the economy of Florida and its citizens’ pockets. Last year alone, the Fraud Tax, or the collective price hike in premiums paid by policy holders was estimated to be nearly a billion dollars. 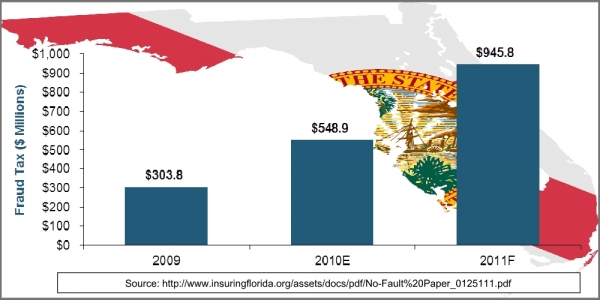 The average Florida driver is already feeling the effect on their wallet, as premiums continue rise on a monthly basis. 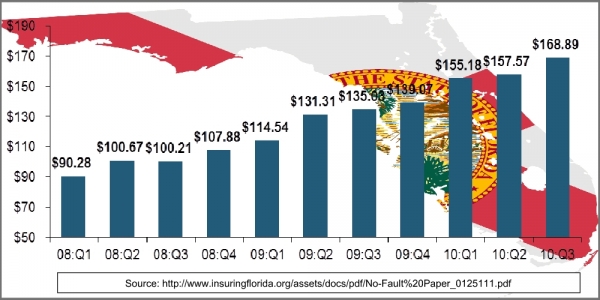 Reform is Required
The Florida system is totally broken. Reform must be implemented immediately to avoid a total collapse of the insurance and healthcare industries in the state along with severe damage to the overall economy. The state’s dated insurance laws need to be replaced with laws that allow for more open insurance markets. Setting minimum levels at high price levels only incentivizes abuse. Additionally, the attorney multiplier is a relic of the years immediately following desegregation; no longer serving the disenfranchised but instead lining the wallets of ambulance chasers, fleecing the system at every level from the driver to the provider.  Without reform, an already reeling state will continue to spiral towards economic ruin.

Fine presentation. Well documented for both non-Florida and Florida residents to understand. Your points are factually correct, although the article is without any solutions. Curious to know, what legislation do you propose would actually pass through the good-old boy process in Tallahasee?
If anyone has an agenda against trial lawyers, it is Governer Rick Scott who has been outspoken agianst Florida's PIP system; however, he too has yet accomplish any true ground on PIP reformation. Criticizing the Florida law is one thing, and getting rid of the 1-800-AskGary referal type services is another. What is your plan of getting a new law in place?