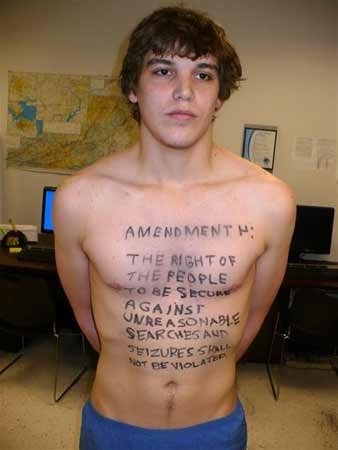 He removed his sweatpants and shirt, leaving him in nothing but running shorts and socks. Anticipating the potential for invasive screening, Tobey prepared by writing the Fourth Amendment on his chest; a peaceful protest to what is now commonplace procedure in airports across America.

Despite Tobey's compliance with TSA instructions, TSA agents contacted airport officials and Tobey was arrested for "creating a public disturbance." The charges were later dropped.

Tobey then sued TSA and the airport seeking $250,000 in damages for violation of his First, Fourth and Fourteenth Amendment rights. While Tobey received no monetary compensation, the cases with all respective parties have been settled.

The Fourth Circuit Court of Appeals had this to say in the majority opinion:

It is crystal clear that the First Amendment protects peaceful nondisruptive speech in an airport, and that such speech cannot be suppressed solely because the government disagrees with it. Thus, Mr. Tobey’s right to display apeaceful non-disruptive message in protest of a government policy without recourse was clearly established at the time of his arrest.

While the sensitive nature of airport security weighs heavily on the Court, protest against governmental policies goes directly to the heart of the First Amendment. The First Amendment symbolizes our "profound national commitment to the principle that debate on public issues should be uninhibited, robust, and wide-open, and that it may well includevehement, caustic, and sometimes unpleasantly sharp attacks on government and public officials." New York Times Co. v. Sullivan, 376 U.S. 254, 270 (1964). Here, Mr. Tobey engaged in a silent, peaceful protest using the text of our Constitution—he was well within the ambit of First Amendment protections. And while it is tempting to hold that First Amendment rights should acquiesce to national security in this instance, our Forefather Benjamin Franklin warned against such a temptation by opining that those "who can give up essential liberty to obtain a little temporary safety, deserve neither liberty nor safety." We take heed of his warning and are therefore unwilling to relinquish our First Amendment protections—even in an airport.

The miscontexualization of Ben Franklin aside, this decision is an important First Amendment victory.  According to the Wall Street Journal's Jacob Gershman, "Richmond International Airport officials announced this week that their security officers underwent a special two-hour training course on the First and Fourth Amendment rights of passengers as a part of a settlement with Mr. Tobey." As for the TSA? Well, they've, "agreed not to appeal the ruling or further prosecute Mr. Tobey for interfering with TSA procedures," says Gershman.