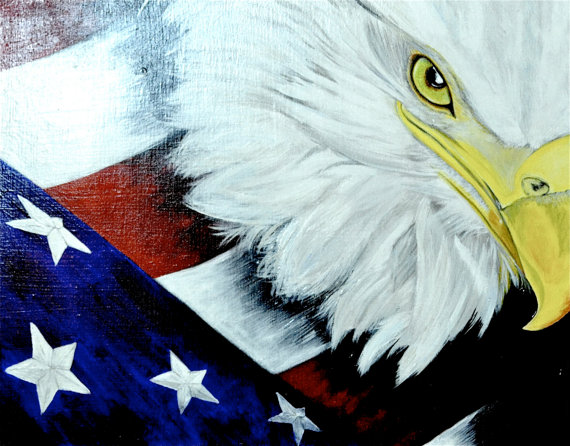 Melissa often paints patriotic themed art because she feels that it is important to remember and remind others of the great country in which we live. She is saddened by the direction in which our country is heading, both politically and socially. We were once a proud country and she believes it is time to get back to that. We are the greatest Nation in the world and Melissa hopes her art will help remind people of that greatness.

Melissa is a self-taught painter, originally from Newburgh, NY. She is a Registered Nurse living in San Antonio, Texas. Though Melissa has been painting and drawing since childhood, she has had no formal art education other than a few classes in school and as an adult. She is a member of RAW: natural born artists, and Contemporary Fine Art International. Her work can be seen on the blog, Artists of Texas Contemporary Paintings and Art, as well as on her website or Facebook page.

Melissa’s paintings are poignant and vibrantly representative of the scenes and objects that inspire her creativity. Much of her work gives a slice-of-life impression of having just walked into a scene that someone recently occupied. One feels as if they only just missed something, or maybe need to sit a spell and see what develops. This feeling of inclusion and familiarity makes her work appealing both emotionally and aesthetically. It is gratifying to know that an appreciation for beautiful art often leads to clients commissioning work from Melissa for their homes and businesses. In addition to painting for her own inspiration and as commissioned by others, Melissa participates in charity events in her local community. When an artist cares enough to give something back to their community, it resonates with people, cultivating the foundation for an artist to grow upon.

The Next Generation of Liberty Artists: Kate Barnett

Kate joined Liberatchik around the age of 20, when she was actively seeking like-minded artists; making her one of our youngest members. After years at a liberal charter art high school and experimenting with the idea of college at the local community college, she needed a more real and genuine way in which to promote her work and ideas.

Richard Wobbe is one of our newer artists at Liberatchik, but he is quickly making up for lost time. He wanted to describe how he came to our group in his own words: