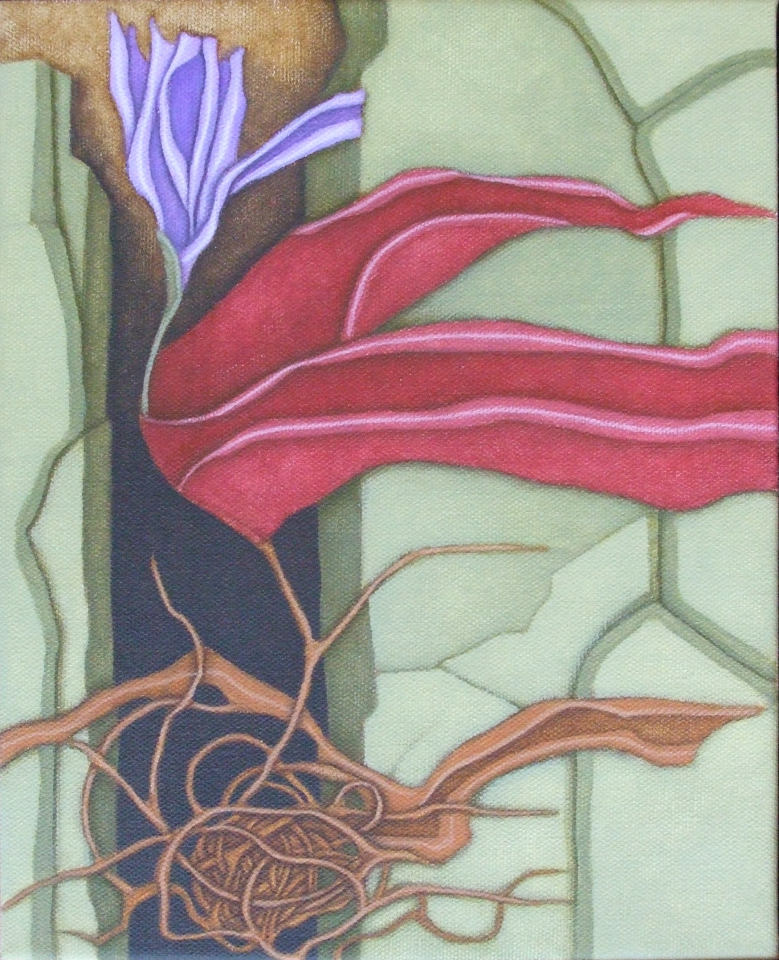 In the Flesh by Michele Bledsoe
Gallery

Much of what I have learned about Michele and her art has come from her writings and stories. I was interested to know that she became an artist at a young age, much as I did myself. In much the same way that I came to an early love of art and a desire to draw, Michele was inspired by the children's books of her youth.

Michele Bledsoe is a self-taught painter; but she didn't start her creative career with brush in hand. In fact, she came to the art of painting as a means to deal with the grief she felt at her father's death. In My Easel and I: A Love Story, you learn about the touching expression of her father's love and his desire to give her something that would last forever – a metal easel. Though she had previously brought her imagination to life with drawing instruments and whatever paper was available when inspiration struck, her father's passing and the easel he bestowed upon her put Michele on a path to self-discovery and broader creative purpose.

Michele's stories are beautiful and touching in their sweetness and emotional depth. Though The Return of Boo Radley is my personal favorite, I find myself moved by the eloquence within all of her stories. There is a little bit of Michele in each one and she has a penchant for making the reader feel as if they were a participant in each story. Vivid images of embellished pine cones and whimsical creatures spring to life in the reader's imagination as her stories unfold.

It seems quite logical that Michele would eventually decide to create her very own children's book, though the path she took to launch the project was not traveled in the typical way. I suspect that much of what Michele does is not typical, so it is quite fitting that her art literally came before the idea to create the book. In fact, her sister is the person who opened her eyes to the fact that the book was already written; on the walls of her own studio that are covered with her small but vibrant images.

Michele has had some surprising revelations along her creative path. The most important discovery she has made was the distinction between message-driven stories and books destined to become classics of lasting cultural impact. This is a rare distinction in our modern, instant gratification society. Michele found that books designed to inspire are beautiful and imaginative, subtle and creative, transcending cultural trends and pop imagery. The result is The Secret Kingdom, a collaborative book of art and poetry between Michele and her husband Richard. This beautifully written and creatively illustrated book provides an artist's glimpse into the worlds of dream and imagination lost in much of modern pop culture. It is sure to inspire current and future generations of children to embrace the creative rumblings of their own minds and cultivate lasting beauty and inspiration for years to come.

Find out more about Michele at http://secretkingdombook.wordpress.com/about

imcarl, If you would like to learn more about Liberatchik and jon our efforts to Take Back the Culture, please do the following:
1. Visit our web page and Facebook
http://liberatchik.com/
https://www.facebook.com/Liberatchik?ref=mf
2. get in touch with me for submission guidelines
Thank you for sharing your work with us.
frances@machinepolitick.com

Powerful imagery - thank you for sharing