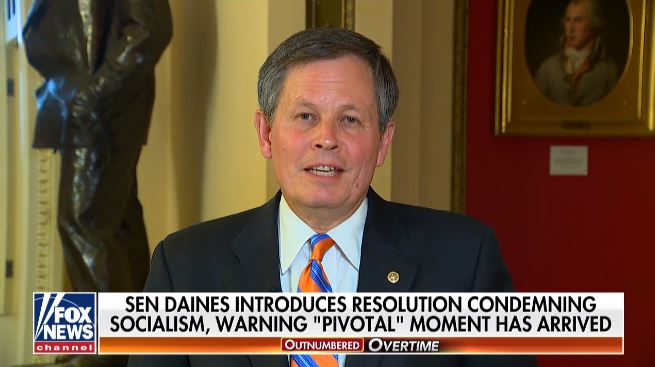 The resolution, introduced earlier this week, is extremely timely given the recent rhetoric heard in the Democratic debates. While it may be easy to laugh at how absurd some of the policy proposals are and just how much “free stuff” each candidate is promising to Americans, it is critical to seriously look at how harmful such proposals are due to the political ideology attached to them.

Sen. Daines’ resolution rightly points out that “prominent elected officials in the Senate and the House of Representatives are self-described socialists and espouse socialist proposals.” Many of these same elected officials are running for president in the Democratic primary, because, increasingly, the word “socialism” is gaining support among younger voters. They equate “socialism” with the promise of “free stuff.” What is lost in translation, however, is what such policies would mean.

If government were impartially selfless and fully efficient, this perhaps would not be a problem. However, as Margaret Thatcher once stated, Sen. Daines’ resolution notes, “Socialist governments...always run out of other people’s money.” Herein lies the root of the problem with socialism and why socialist policies will never be able to deliver on the “free” things it promises. Sure, Americans will not be paying out-of-pocket directly for these things, but they will also not receive what is being promised.

Americans will pay massively in taxes for a government Ponzi scheme that takes their dollars in and churns out little to no benefit for them while simultaneously outlawing private methods of obtaining the things that were promised and never delivered. This is the inevitable end of socialism, which is particularly frightening when one considers that this is the fate of Americans’ healthcare should socialism be adopted in this space. Whether it be as Medicare for All or any other track to single-payer, government-run healthcare, the outlook is grim.

As Sen. Daines warns in his resolution, “socialism and the policies advocated by self-described ‘democratic socialists’ have an underlying historical connection to the Marxist theory.” It is because of “the perverse incentives and inherent flaws of the Marxist theory [that] socialism inevitably leads to societal rot, resulting in devastation, economic poverty, and destruction.”

So what do we do about this wave of socialism that is crashing down on our country and entrancing voters across the nation? Firstly, we warn Americans that “free stuff” is a false promise and nothing more than a way to justify taking more and more of their hard-earned money to embolden the federal government and increase its power to take away more of their assets, with only harm in return.

He continues to say, “the United States is the single greatest country in the history of the world, due in large part to its system of government that secures the private property rights of all citizens through the genius of the Constitution of the United States.” This is what we must protect and preserve, never backing down to defend not just the merits, but the genius of the American system as envisioned by our founding fathers.

As President Trump said in State of the Union address in February of this year, “America will never be a socialist country.” It is shocking that in a room full of members of our nation’s legislative body, this line was not applauded by all.

The threat of socialism is very real and Sen. Daines is both brave and correct to confront it head-on in this legislation. His resolution would have the Senate declare “that, throughout the history, tradition, and national civic spirit of the United States, the United States has been a beacon of light shining like a lighthouse to the rest of the world, demonstrating that freedom and liberty are the surest foundation of government.”

To this, we say “amen.” FreedomWorks appreciate the work that Sen. Daines and other freedom fighters are doing in Congress to lift up this message in S.Res. 289, reminding our nation of why we are so incredibly lucky to have our lives, our liberties, and our pursuits of happiness here in America.