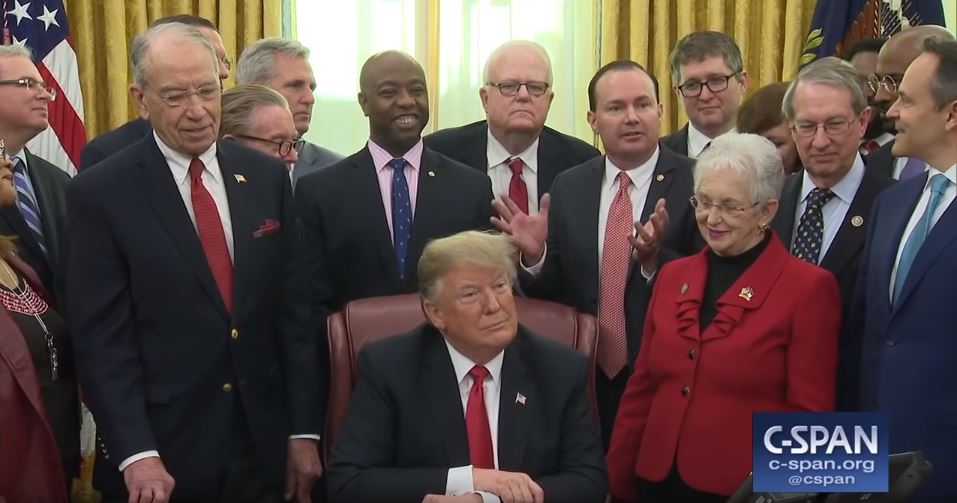 For the successful passage of this bill, we owe endless thanks to the tireless work of bipartisan criminal justice reform champions including Sens. Chuck Grassley (R-Iowa), Mike Lee (R-Utah), and Dick Durbin (D-Ill.) alongside Reps. Doug Collins (R-Ga.) and Hakeem Jeffries (D-N.Y.). Credit is also due to the leadership of President Trump and Jared Kushner at the White House, as well as backing of conservative groups, faith leaders, and law enforcement.

Broadly speaking, the First Step Act requires the creation of an evidence-based risk and needs assessment for offenders in Bureau of Prisons custody to inform the implementation of individually-tailored recidivism reduction programming for offenders to reduce his or her risk of reoffense upon release. Additionally, it reforms a small number of sentencing laws to ensure that limited resources are used on dangerous offenders and that lengthy sentences are not unnecessarily imposed on low-level offenders.

Although the prison reform provisions of the First Step Act will phase in over time as the risk and needs assessment and programming are designed, the sentencing reforms have already had a meaningful impact. The most visible example of this is the release of a man named Matthew Charles due to fully retroactive application of the Fair Sentencing Act of 2010 which was included in the First Step Act.

Matthew Charles was sentenced to 35 years for selling crack cocaine to an informant in the 1990s, when the crack-to-powder cocaine sentencing disparity was 100-to-1. This disparity was reduced in 2010 by the Fair Sentencing Act to 18-to-1, and although Congress did not provide for retroactive application of the law, certain guidelines issued by the United States Sentencing Commission allowed for a population of offenders sentenced before 2010 to receive a sentence reduction under the new penalty. Matthew Charles was among these, and was released from prison in 2016 as a result.

During his incarceration, Charles was a model inmate. He took college classes, taught a GED program, and became a law clerk, but that was not all. He served as a mentor and adviser to fellow incarcerated men, organized bible studies, and had not one single disciplinary infraction.

Since his release in 2016, Charles held stable employment, volunteered in his community, and reentered society as a successful citizen. He was a perfect example of what it means to be rehabilitated and to help others do the same.

However, because he had a short stint in state prison prior to his federal offense, the U.S. Attorney’s office appealed his sentence reduction, labeling him a “career offender.” They were successful, and in June 2018, Charles was forced to return to prison to serve out the rest of his sentence, despite his clear and total rehabilitation. The nation was heartbroken.

During the fight to get the First Step Act across the finish line last year, many questions were raised about what the human impact would be of such legislation. It is one thing to view criminal justice reform by simply discussing various code sections, offense types, and mandatory minimum sentence lengths. It is another thing entirely to put real names, faces, and lives into those same discussions.

As heartbreaking as it was for many to see Matthew Charles sent back to prison unfairly, it is just as heartwarming to know that the First Step Act has brought him back home. Undoubtedly, this is only one family of many that will have their story changed and their lives transformed by the second chances and hope that were made reality in the First Step Act.

The article you have shared here very awesome. I really like and appreciated your work. I read deeply your article, the points you have mentioned in this article are useful
http://minecraft2.com.br/

FreedomWorks is proud to announce that our bill of the month for August 2020 is the Support Children Having Open Opportunities for Learning (SCHOOL) Act, S. 4432, introduced by Sen. Rand Paul (R-Ky.). The SCHOOL Act would grant American families more choice in how their children are educated both during the COVID-19 pandemic and long after schools return to normal. School choice can and should be the norm, not the exception.